Arum: We Have Plans For Teofimo Lopez That Don't Involve WBC

Top Rank will openly embrace the World Boxing Council (WBC) ruling that as Vasiliy Lomachenko fighting for its lightweight title.

The other ordered lightweight fights weren’t met with quite as much interest.

An overwhelming vote by the WBC Board of Governers ruled in favor of a petition filed by Lomachenko to face the sanctioning body’s top rated contender, Luke Campbell for the recently vacated 135-pound title. Campbell was due to face Mikey Garcia, who vacated the title rather than commit to immediately returning to the division following a 12-round loss to Errol Spence in a failed welterweight title bid in March. 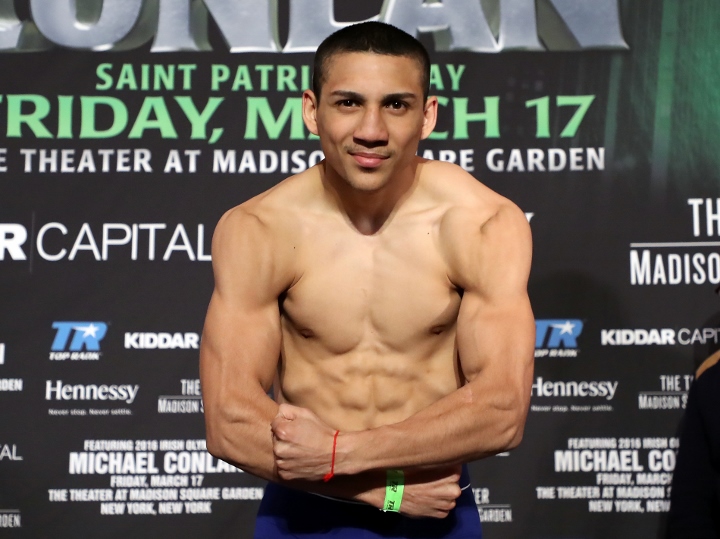 With Campbell’s advancement to the title comes in a shift in the rest of the rankings. The WBC sought to order a four-man boxoff, which includes Top Rank’s stud contender Teofimo Lopez in a semifinal eliminator versus former 130-pound titlist Javier Fortuna. The other side of the bracket has Russia's Zaur Abdullaev facing unbeaten American contender Devin Haney, with the WBC's vision of the two winners meeting to determine a future mandatory challenger.

That particularly ruling won’t be met, at least not on Lopez’s end.

“We already have plans for Teofimo Lopez that don’t involve the WBC at this moment,” Hall of Fame promoter Bob Arum told BoxingScene.com on Tuesday. “We respect that the WBC has a job to do in ordering these fights and establishing mandatory challengers. But right now, we are taking (Lopez) in a different direction).”

Top Rank promotes Lomachenko and Lopez; the company currently has options on Commey, whom is primarily promoted by Lou DiBella.

Ghana’s Commey (28-2, 25KOs) won the IBF title on a Top Rank on ESPN show this past February in Frisco, Texas. His 2nd round knockout of Isa Chaniev came on the same card as Lopez’s one-sided stoppage of veteran contender Diego Magdaleno.

Next up for the recently crowned titlist is a voluntary defense of his title in late June versus a challenger to be determined. From there, Top Rank plans to match the winners—from their end, presumably Commey and Lopez—in a title fight later this fall, which is around the targeted time frame for Lomachenko (13-1, 10KO) to put his two belts on the line in pursuit of a third versus England’s Campbell (20-2, 16KOs).

With all four major belts being contender for at the same relative time, it can only create a much clearer path for full unification than if Lopez were to go in a different direction.

“God-willing, Teofimo Lopez beats (Nakatani)—who is a superb fighter, mind you—and Commey wins his voluntary defense, then they get to fight next,” confirms Arum. “Whomever emerges as the IBF champion, that would be great to unify all four titles.

“Now from our end, of course we’d like for Loma to beat Luke Campbell and then bring the winners together for one big fight for all the marbles. That’s what boxing needs more of, these fights to get rid of all the confusion of who’s the best. And we now have a chance to make that a reality in the next few months to come.”

[QUOTE=Ca$ual Fan;19726894]Both scenarios should be on the same timeframe I believe. It's just up to Commey who he wants to fight after his "tune-up" fight. Lopez as a mandatory or Loma for a total unification. For Teofimo, if he really…

[QUOTE=Bronx2245;19726574]The problem is "how much longer can Teofimo stay @ 135?" I think the only scenario that works is Commey-Lopez winner vs. Loma! Even that has to be in January, February at the latest![/QUOTE] Both scenarios should be on the…

[QUOTE=T.M.T;19725675]Translation Arum won't ever let Teofimo beat down Loma.[/QUOTE] Teofimo is a prospect, just like Stank Davis. Does Stank Davis want to square up with Lopez?? did not think so... tMT is garbage, bunch of scarred lil girls who wait…

[QUOTE=Ca$ual Fan;19726453][B]Loma-Commey winner vs Lopez[/B] Commey-Lopez winner vs Loma Either route is fine as long as they get an undisputed champ in that division. Everyone else in the division not named Mikey is irrelevent imo. Someone has to get all…

[QUOTE=T.M.T;19725675]Translation Arum won't ever let Teofimo beat down Loma.[/QUOTE] As much as u dont like Loma (we all know why) you don't even believe Lopez will even get close to beating him