Arum revealed after Smith’s victory Saturday night that he intends to match Smith against the winner of another main event ESPN will air Saturday night – Eleider Alvarez versus Michael Seals. Alvarez, a former WBO 175-pound champion, will fight for the first time since Sergey Kovalev out-pointed him in their 12-round rematch nearly a year ago.

“We have a good light heavyweight fight next week,” Arum said, “and I would like [Smith] to fight the winner of that fight.” 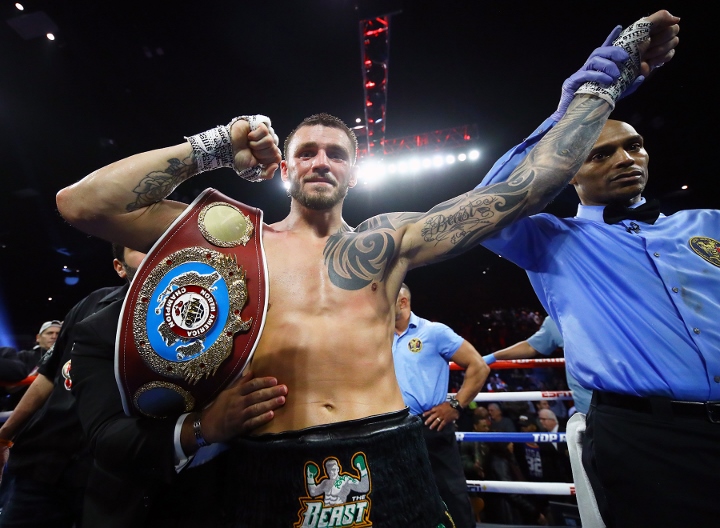 The Colombian-born, Quebec-based Alvarez (24-1, 12 KOs) is a better boxer and is much more experienced at the championship level than Seals (24-2, 18 KOs). Atlanta’s Seals is a big puncher, though, and knows full well at the advanced age of 37 that he must capitalize on what’s by far the biggest opportunity of his career.

“I don’t know,” Smith said when asked who’ll win the Alvarez-Seals bout. “That fight could go either way. They’re both big punchers, so I’m definitely gonna watch it. It’ll be a great fight.”

Smith also confirmed that he is more than willing to face the Alvarez-Seals winner next.

“Whatever my team thinks is best, you know, I’m gonna go with it,” Smith said. “I never turn down a fight and I’ll be ready for whoever they got for me.”

The 30-year-old Smith (25-3, 20 KOs), of Mastic, New York, bounced back against Hart (26-3, 21 KOs) from a lopsided points loss to WBA light heavyweight champion Dmitry Bivol in his previous fight. Russia’s Bivol (17-0, 11 KOs) easily out-boxed Smith and won a wide unanimous decision over him March 9 at Turning Stone Resort Casino in Verona, New York, the same site of the Alvarez-Seals fight.

Joe DeGuardia, Smith’s co-promoter, is intrigued by the prospect of Smith meeting the Alvarez-Seals winner.

“The division’s a hot division,” DeGuardia said. “Look, next week’s a big fight and we’ll certainly be up there. We’ll be scouting it out. They’re certainly a potential opponent for Joe, but we’re on the scene.”

[QUOTE=Satir;20324082]Zurdo should be somewhere in this equation as WBO's highly rated guy[/QUOTE] Yep, Zurdo is rated number 1 in the WBO: [url]https://box.live/boxing-rankings/[/url]

[QUOTE=Afi23;20323806]Yeah, I like this idea. The winner vs Smith for the vacant WBO belt. The winner faces Pascal in a "unification"/retirement fight for Pascal (I'll let you have your opinion on a regular WBA belt). My man Pascal retires without…

Yeah, I like this idea. The winner vs Smith for the vacant WBO belt. The winner faces Pascal in a "unification"/retirement fight for Pascal (I'll let you have your opinion on a regular WBA belt). My man Pascal retires without…

It would be amazing to watch both of them, respect.

would be a very interesting matchup