NEW YORK – The WBC has mandated that Jose Ramirez must make his first title defense against Regis Prograis.

Arum wants to pair Ramirez, who won the WBC super lightweight title Saturday night, and Prograis, the newly crowned WBC interim 140-pound champion, in separate fights as part of an ESPN doubleheader sometime in June or July. Assuming Ramirez (22-0, 16 KOs) and Prograis (21-0, 18 KOs) win those fights, Arum would then make a Ramirez-Prograis bout toward the end of this year. 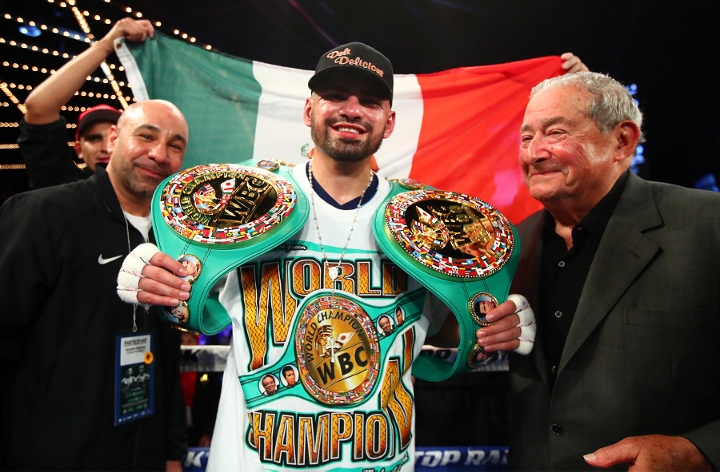 The Hall-of-Fame promoter already has discussed his plan with Lou DiBella, Prograis’ promoter.

“I talked with Lou and we’re gonna see if we can put them on the same bill next, and then have them matched,” Arum said following Ramirez’s 12-round, unanimous-decision defeat of Amir Imam in The Theater at Madison Square Garden. “So then people will know Prograis.”

Arum added that the Ramirez-Prograis doubleheader would take place at a minor-league baseball stadium in the Fresno, California, area, where Ramirez has become one of boxing’s biggest draws thanks in part to his social activism. When informed of his proposed appearance on a Ramirez undercard, Prograis expressed reluctance.

Prograis is concerned that if he agrees to participate in a doubleheader that would feature Ramirez, and they both win, that he still won’t get to challenge Ramirez in his following fight.

“We’ll take to the promoters and we’ll see,” Prograis said. “But I’m a competitor. I wanna fight the names. I still wanna fight Postol. I wanna fight someone like Adrien Broner. And I wanna fight Ramirez. You know, but of course, before anything I wanna get the belt. I don’t want [Ramirez] to trying to swiggle around. And I know they might wanna try to get Pacquiao to fight [Ramirez]. I don’t know, but it might happen.”

Bob not stupid. He knows Prograis beats the hell out of that dude. He is trying to hang on to the belt, but its a mandatory so let that strap go if you don't want your boy to fight.

I doubt this is Ramirez. This is a promoter seeing a paycheck for himself and his fighter. Normally I would not care, and I would be fine if it does go down that way. Fighters careers are short in this…

[QUOTE=Dean_Razorback;18584205]well, ramirez won the belt while vacant so, isn't he supposed to fight the number 1 contender? the mandatory challenger?[/QUOTE] Unless he's unifying the belt, yeah. With a second one due after within the year.

doesnt matter what bob wants, theyre fighting next or drop the belt

Make the fight now, no need to marinate. Whoever loses, needs to fight back to back contenders & they'd get their rematch.