During a recent interview with BoxingScene.com, Top Rank's CEO Bob Arum outlined some of the plans for the rest of the year, which he said will include weekly – instead of twice-weekly – ESPN cards in August from the conference center “bubble” inside the MGM Grand in Las Vegas. The Nevada State Athletic Commission recently approved Top Rank date requests for Aug. 6, Aug. 13, Aug. 20 and Aug. 27, all Thursdays.

Arum offered one caveat to the August dates. “It depends on what happens with the team sports,” Arum said as it relates to ESPN’s schedule.

Arum said two of the main events in August, likely in the second half of the month, will be unified junior welterweight world titlist Jose Ramirez against former titlist and mandatory challenger Viktor Postol in a fight that has already been postponed twice due to the coronavirus pandemic, and the light heavyweight world title elimination fight between former titleholder Eleider “Storm” Alvarez and former title challenger Joe Smith Jr.

One initial concern about rescheduling Ramirez-Postol was the fact that Postol is from Ukraine and might have issues coming to the United States because of travel restrictions caused by the pandemic. But Arum said Postol is already in the U.S., which eliminates that issue.

Ramirez (25-0, 17 KOs) was originally slated to make his fourth defense against Postol (31-2, 12 KOs) on Feb. 1 at the Mission Hills Haikou resort in Haikou, China but was postponed on Jan. 23 because the coronavirus problem was just emerging in China. It was rescheduled for May 9 at the Save Mart Center in Ramirez’s home region of Fresno, California, but postponed again.

Alvarez (25-1, 13 KOs) and Smith (25-3, 20 KOs) were supposed to headline the July 16 ESPN card but the fight was postponed when Alvarez suffered a right shoulder injury in training.

“Yvon Michel (Alvarez’s co-promoter) said the doctors say Alvarez will be fine to fight by the third week of August,” Arum said.

The winner of the fight will earn a shot at the WBO’s vacant world title that Canelo Alvarez relinquished. 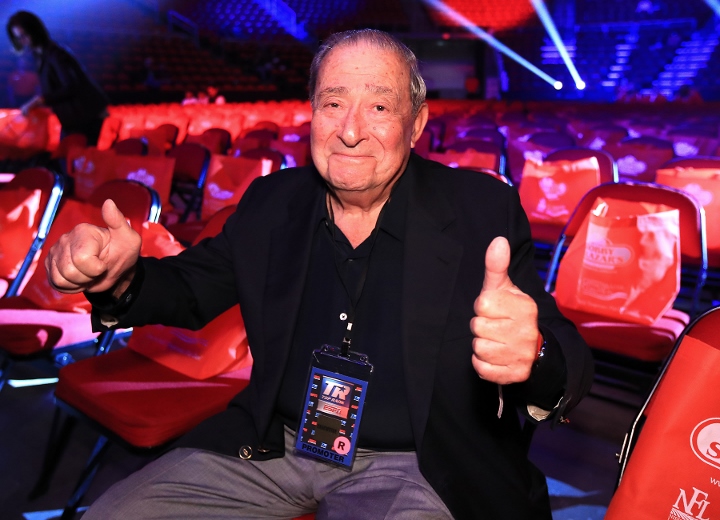 Top Rank, working with MTK Global, will also put on a card on Aug. 15 with junior lightweight and former two-division titlist Carl Frampton (27-2, 15 KOs) and featherweight contender Michael Conlan (13-0, 7 KOs) in separate bouts of a doubleheader likely to take place in their hometown of Belfast, Northern Ireland. Arum said the fight would air live on ESPN in the afternoon. Arum said there are no opponents locked in yet for Frampton or Conlan.

Another fight Top Rank had to postpone due to the coronavirus was between unified junior welterweight titlist Josh Taylor (16-0, 12 KOs) and Thai mandatory challenger Apinun Khongsong (16-0, 13 KOs). It was initially scheduled for May 2 in Glasgow, Scotland, Taylor’s home country.

“The question is where is it going to be,” Arum said. “We’re trying to be flexible.”

“We hope – because we don’t have control over this – that we will be able to do it with spectators safe distancing in the Allegiant Stadium, the Raiders Stadium (in Las Vegas),” Arum said of the fight that, like their second bout on Feb. 22, will be a joint pay-per-view between ESPN and Fox.

“If we can’t do it with spectators we’re going to have to move it overseas.”

All good and decent fights, hope they lock in officially.

Gotta admit, really need audiences. What about a week long event with several venues along side each other running fights off one by one. A "boxing woodstock"so to speak where once cleard you camped out for a week. Watching Valdez…