Arum: Terence Crawford is on The Level of Sugar Ray Leonard

Lomachenko was in action last month, when he captured his third division world title with a tenth round TKO of Jorge Linares at Madison Square Garden in New York City. 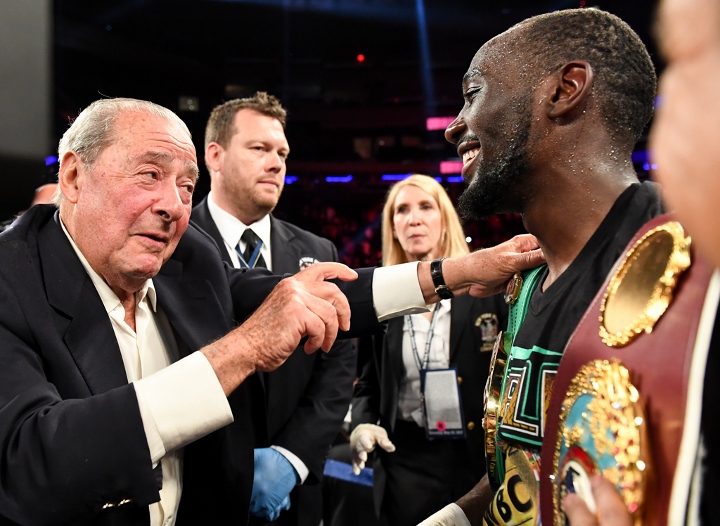 Arum has often compared Lomachenko to legendary heavyweight Muhammad Ali - and he also feels the talented Crawford is also on the level of Sugar Ray Leonard.

“He’s a throwback to Sugar Ray Leonard, that’s the fighter I compare him with,” Arum said. “Is he better than what Leonard was? That’s hard to say, but certainly he’s on that level. He’s just absolutely been spectacular.”

And Arum is equally as high on Crawford, who captured a world title at lightweight, unified the entire junior welterweight division and is now going for his third world title at 147-pounds.

On June 9th at the MGM Grand in Las Vegas, Crawford will challenge Jeff Horn for the WBO welterweight title.

Crawford is not the biggest trash talker, but he backs up his talk in the ring with very dominant results.

“I want Crawford to be Crawford,” Arum said. “I don’t want him to be anything he’s not comfortable with. A lot of these guys for years tried to be Muhammad Ali out of the ring with their mouths, but there was only one Muhammad Ali.

“You gotta let these kids develop their own personality. Crawford is ready for the ride of his life, starting with the Horn fight because he’s becoming the poster boy of ESPN."

[QUOTE=MarB;18827340]here is where i agree with you that at 147 he has a chance to prove hes as great at SRL he has time to get there sure but he isnt there yet. SRL had better footwork and handspeed, he…

Mikey garcia , a guy who arum did wrong and stalled his career, recommended crawford to manager cameron dunkin because they had fought in the amateurs, then dunkin got crawford with top rank And arums out here making absurd comparisons.…

[QUOTE=NachoMan;18827317]I don't think so. If you've watched him fight, there is plenty to show that Bud's skills and athleticism are on the level of both Mayweather and SRL. I don't say that lightly, as I have always been a huge…

[QUOTE=MarB;18825633]smh Arum lost his damn mind. Bud Crawford is nowhere near close to mayweather let alone the Legend Sugar Ray.....damn sucker done lost his mind with this statement[/QUOTE] I don't think so. If you've watched him fight, there is plenty…

I like Crawford but this is a ridiculous claim. Crawford has fought 32 times in the space of 9 years so far, and his best wins are probably Indongo, Postol, Burns and Gamboa. That's not awful or anything, at least…