Arum Saw Teofimo Lopez as Hidden Gem When He Signed Him

If there was a fighter flying under the radar after the 2016 Olympic Games in Rio de Janeiro, it was Teofimo Lopez.

That signing might be a steal as Lopez has become a popular figure in boxing with his spectacular knockouts and post-fight celebrations. 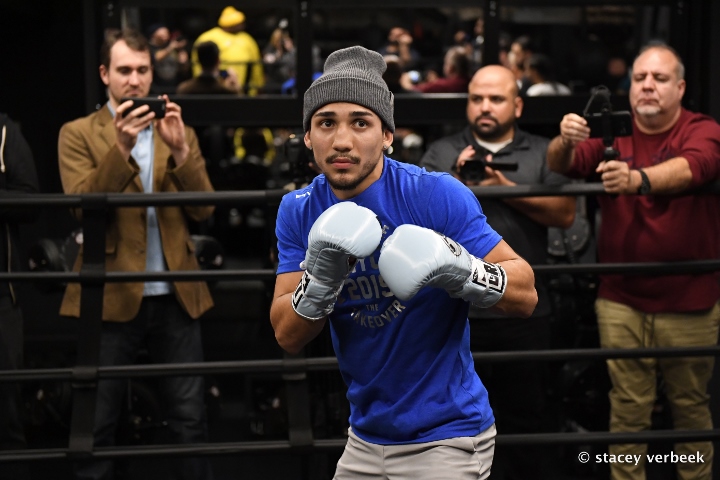 Lopez hopes all that will culminate with a world title win tonight as he faces IBF lightweight titleholder Richard Commey at Madison Square Garden in New York City. The 12-round bout will precede the main event bout between WBO welterweight titleholder Terence Crawford and mandatory challenger Egidijus Kavaliauskas.

Lopez (14-0, 11 knockouts) became the mandatory challenger in his last bout on July 19 in Oxon Hill, Maryland, defeating Masayoshi Nakatani by unanimous decision. It was his first decision victory for the Brooklyn, New York fighter after knockout out five consecutive opponents.

Top Rank has built on the success of the 22-year-old fighter, showcasing him on big fights cards, especially at Madison Square Garden, where he can build on a growing fan base. So far, Lopez’s signing has been great for Top Rank, despite Lopez not winning a medal at the Olympic Games.

“That’s the thing,” promoter Bob Arum told BoxingScene in a recent interview. “You get guys who either go to the Olympics or don’t go to the Olympics, and don’t do particularly well. The one fighter that I remember who lost in the first round who we signed was Miguel Cotto and look how Miguel turned out.”

Arum also compared Lopez’s plight with one of Crawford, who did not qualify for the Olympic Games years ago.

“Guys can lose in the Olympics, some don’t even make the Olympics, like (Terence) ‘Bud Crawford, and look what a great fight he turned out to be. So, a lot of these guys are hidden gems,” said Arum.

And if he loses tonight, Bob will tell the press tomorrow that Lopez was a gamble... nothing special but worth a shot.

Teofimo needs to go to Commeys body or he will have some problems tonight.