Arum: Robeisy Ramirez Is A Spectacular Fighter; Is Gonna Be A Major Star

Bob Arum isn’t only convinced Robeisy Ramirez will avenge the loss he suffered in his pro debut.

Ramirez’s promoter is certain based on his improvement since that split-decision defeat to Adan Gonzales in his first professional fight that he’ll realize the potential that made Arum sign him to a contract last year. The two-time Olympic gold medalist has won each of his three bouts by knockout since suffering that surprising setback August 10 in Philadelphia.

Ramirez (3-1, 3 KOs) will get an opportunity to avenge his defeat to Denver’s Gonzales (5-2-2, 2 KOs) in a six-round, 126-pound encounter ESPN will televise Thursday night from Las Vegas.

“When we signed Ramirez, we knew we were signing a blue-chipper because you have to be a blue-chipper to have beaten Shakur Stevenson in the amateurs to win a gold medal,” Arum told BoxingScene.com, referring to their Olympic bantamweight gold-medal match in August 2016. “We were very disappointed with his first fight, but it was understandable because he was on the lam for a year, escaping the Cubans, traveling all over. Now he’s in [Las Vegas], dedicated. He’s a tremendous talent, and we’re giving him an opportunity to erase the loss. We believed when we signed him that it was a major talent that we were signing. He’s come through in a few fights, and we believe that he’ll go on to stardom.” 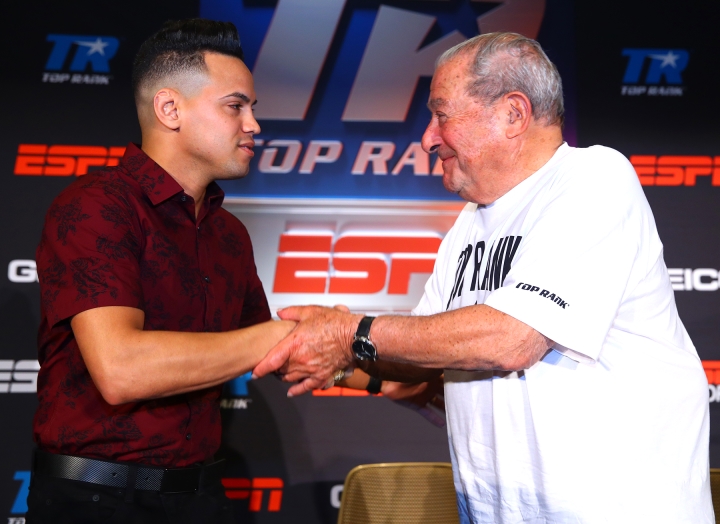 The 26-year-old Ramirez changed trainers after losing his pro debut and moved from the Tampa area to Las Vegas. He has adapted to the pro game under the tutelage of acclaimed Cuban trainer Ismael Salas, whom Ramirez credits for his improvement.

Ramirez dropped Yeuri Andujar (5-4, 3 KOs) twice and stopped him in the first round just three weeks ago at MGM Grand Conference Center, the same site of the Gonzales-Ramirez rematch Thursday night. The 23-year-old Gonzales hasn’t fought since he knocked down Ramirez in the first round and beat him on two of three scorecards in their four-round featherweight fight (40-35, 39-36, 37-38).

Ramirez, a southpaw, told BoxingScene.com recently that he underestimated Gonzales before that bout, a mistake he hasn’t repeated.

“I think he’s gonna be a major star,” Arum said. “Do I know for sure? No. But now that we’ve seen him a few times, he seems like a spectacular fighter. And he’s training right, and all of that stuff. He has a good trainer now, so we’re very optimistic.”

He´s already a traitor to his country. Hope he loses.

[QUOTE=Citizen Koba;20641193]I think he'll snag a title with Arum's leverage and the opportunities he's granted, don't see him going down as anything[I] really[/I] special however. That said hope he ups his game and proves me wrong.[/QUOTE] Some guys are just…

[QUOTE=Mammoth;20641169]Nope........[/QUOTE] I think he'll snag a title with Arum's leverage and the opportunities he's granted, don't see him going down as anything[I] really[/I] special however. That said hope he ups his game and proves me wrong.

Glad to see Ramirez redeem himself!