As BoxingScene.com reported on Thursday, the Nevada State Athletic Commission has barred heavyweights Tyson Fury and Deontay Wilder from having a face-off during the official weigh-in on Friday.

The NSAC issued their ruling based on the heated confrontation between the two boxers during Wednesday's final press conference. Wilder and Fury exchanged harsh words, in a close face to face manner, and they soon began to shove each other before security stepped in to separate them.

Wilder will defend the WBC world title against Fury in a rematch on Saturday night at the MGM Grand in Las Vegas. The first contest, which took place in December 2018, ended in a controversial twelve round split draw. 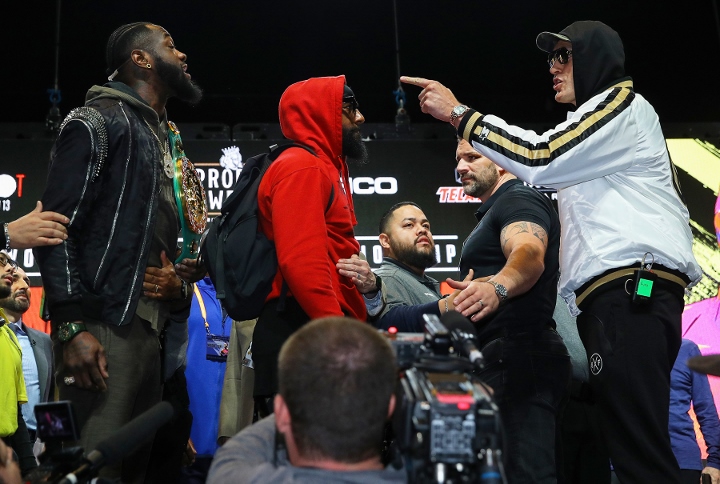 Top Rank's CEO Bob Arum, who co-promotes Fury, understands why the NSAC would prevent the two boxers from facing off at the weigh-in.

Arum was not happy with the shoving match and believes that it sent the wrong kind of message about the sport of boxing.

"We had a face-off at the press conference and these guys, they don't want to hurt each other obviously before the fight, but they start pushing each other and they're not actors," Arum told Sky Sports News.

"They're not trained, it can get out of hand and somebody can get hurt. Also, it sends a real bad image. When you have a press conference over in the UK and it's like a football match, do the players push and shove each other? Of course not, they're sportsmen.

[QUOTE=Aussiebox2019;20403738]Arum your a demented spitful man who dosnt have long left, you hate to see any other promoter do well and youll get whats coming....your maker...……… And Lennox lewis, your a spitful pig agaianst Joshua also, hes made 20 times…

[url]https://www.standard.co.uk/news/crime/pensioner-fights-off-thug-cardiff-a4365051.html?utm_source=taboola&utm_medium=Feed[/url] Here's a video of Arum showing some serious moves.

I think they are keeping them apart for the revenue. If one gets hurt before the fight, it not only hurts the fighters, promoters, and managers; but also hurts the city of Las Vegas and the States money draw. You…

[QUOTE=Buggy bear;20403728]for once I agree with Aram on this , kilt v josh wasn't like this and they still sold .. that **** can have the opposite affect for the casual fan .. just disagreeing with you buddy .. peace[/QUOTE]…

Did Fury didn't want to reveal his weight?