Arum: Mayweather Wouldn’t Have Gone For KO Like Crawford

An aggressive Crawford finished Benavidez late in the 12th round, even though the unbeaten WBO welterweight champion knew he was comfortably in front on the scorecards.

Crawford cracked Benavidez with a right uppercut that sent Benavidez to the canvas with just under 50 seconds remaining in their 12-round, 147-pound championship match. 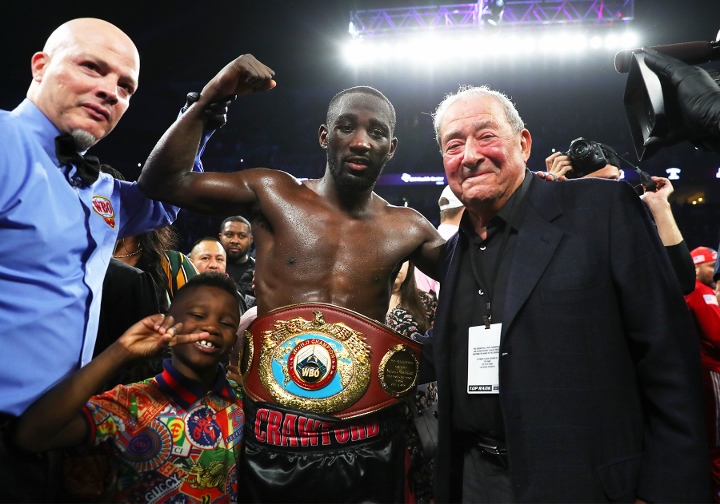 Benavidez reached his feet, only to have Crawford attack him and hurt him again with a right hook. Referee Celestino Ruiz stepped in to stop their fight at 2:42 of the 12th round, with a battered Benavidez against the ropes.

“It was tremendous,” said Arum, Crawford’s promoter. “Let’s be honest about it – most fighters today in that position, having clearly won the fight, would back off in the 12th round, not take any chances and run out the clock. It’s like equivalent to taking a knee. Not him. He’s a performer. He wanted to close the show and that’s what he did, and that makes him special. It really does. Look what we have, other fighters today, that is not the mindset that most of them have.”

“That’s the kind of person he is,” Arum said. “He’s a showman. He wants to close the show. He wants to make a statement. I just think – I mean, we know he’s a brilliant fighter. But the fact that he’s so crowd-pleasing makes him special. And really, in next year, when there’ll be a time when he moves into the pay-per-view arena really seriously, people will remember that.

“They’ll wanna see him fight because he’s so entertaining. And he’s not gonna – again, when you look at Floyd Mayweather, tremendous fighter. Ask yourself honestly, if Mayweather [were] going into the 12th round of this fight, would he have done anything like that or tried to?”

[QUOTE=Cigar;19205119]What a stupid comment. Who cares about the alphabet belts?? They mean nothing. The 'great' Andre Berto has lost 5 of his last 10 fights and he has another title shot coming up. Marcos Maidana was who I forgot. Floyd…

[QUOTE=JcLazyX210;19200395]If you are in love with Crawford send him a Facebook request. We are here to talk boxing and Crawford went 12 rounds with a bum. Atleast Guerrero was a former champion and Berto. I don't and still don't know…

[QUOTE=boxing90;19202580]Did he not pick Zab apart before the low blow? did he not pick Sharmba Mitchell & apart? the guy that crawford fought is not a top 147 pounder just like the guys I just named when they were fighting…

[QUOTE=TheFrog;19202358]He would have quite easily outboxed him (winning more rounds than Crawford did for sure) You're saying Floyd picks apart Welters till the corner jumps in and stops the fight. That simply is not true. He's a sublime boxer but…