Arum: Like Hagler, Crawford Can Be Himself, Make Major Money

Crawford’s promoter compared Crawford to Leonard for how he fights inside the ring and Leonard’s rival for Crawford’s approach outside the ring. Arum made the Hagler comparison after a reporter asked Crawford during a post-fight press conference Saturday night if he needs to do anything different to become more marketable among non-boxing fans.

“Like Marvin Hagler, right?,” Arum said following Crawford’s ninth-round stoppage of Jeff Horn at MGM Grand Garden Arena. “Marvin never did anything, really, to endear himself to you guys. But he made more money than any of the middleweights around because he was Marvin Hagler and he stayed, to the end, being Marvin Hagler. So is Bud Crawford. He’s gonna be Bud Crawford forever.” 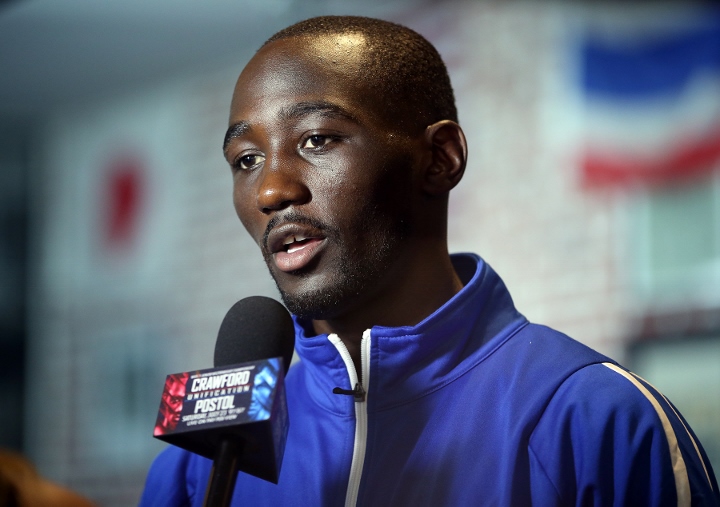 Hagler, who also was promoted by Arum, did commercials for Right Guard, Diet Coke and Pizza Hut, even though the former middleweight champion wasn’t exactly known for having a sunny disposition. Crawford (33-0, 24 KOs) usually is a friendly, engaging guy who gives insightful answers and can show a good sense of humor, but he has drawn criticism in the past for contentious exchanges with certain media outlets.

The 30-year-old Crawford feels he has been covered unfairly at times, which led to how he approached particular outlets at one time. That led to him declining to speak to his hometown newspaper, the Omaha World-Herald, and BoxingScene.com, among others, in the past.

Crawford did countless scheduled interviews before his fight against Horn, the first significant boxing event streamed live via the ESPN+ app. He is firmly committed, though, to remaining authentic as he attempts to become a bigger star.

Crawford’s guarantee for facing Horn was $3 million. He made $1.75 million more than Horn, despite that the heavily favored Crawford was the challenger.

His domination of Australia’s Horn (18-1-1, 12 KOs) made Crawford a three-division champion. The former WBO lightweight and IBF/IBO/WBA/WBC/WBO 140-pound champion won the WBO welterweight title from Horn and maintained his spot as a consensus top-three boxer, pound-for-pound, in the sport.

“He’s a terrific fighter,” Arum said. “I’ve told everybody. I compare him – and it’s the highest praise that I could give a fighter, a welterweight, the mid-level weight divisions – that he reminds me of ‘Sugar’ Ray Leonard. And that, to me, is a great, great compliment because I always thought that Leonard was the best. And this guy is equal, if not better, than Ray was.”

Crawford is Hagleresque in the sense that he switches to Southpaw....but boy....Marvelous Hagler, Hands of Stone Duran , Sugar Leonard and HitMan Hearns were vicious and there was no holding hands and singing Kumbaya among them

Every fighter/Entertainer has to have a story that captures the crowd. You are either "The Good, The Bad, or The Ugly." That's what sell.

[QUOTE=IMDAZED;18858717]The only thing that hasn’t changed is Oscar and the name.[/QUOTE] And his bank account.