Arum: Joshua Will NEVER Be The Same - Ruiz Rematch is Insane!

But that's not what happened on June 1 at Madison Square Garden in New York City.

Instead, Ruiz pulled off one of the biggest upsets in boxing history - when he dropped Joshua four times for a seventh round TKO, to capture the WBO, WBA, IBF, IBO world titles. 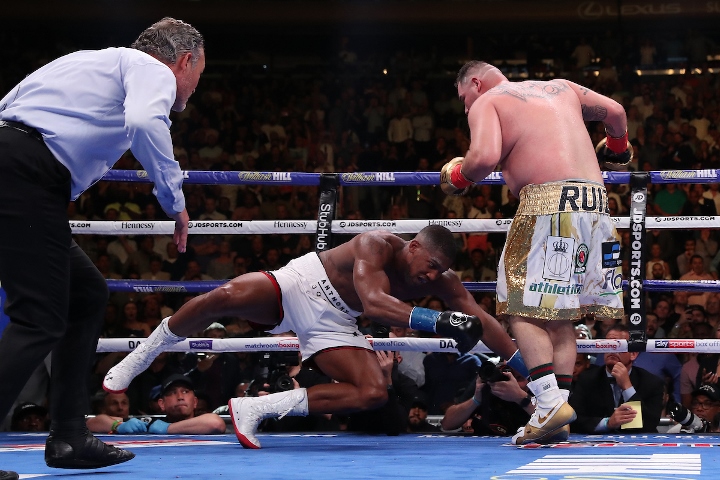 Arum is shocked by what transpired in the fight.

Arum's company had promoted Ruiz for a better part of his career, but the boxer broke away from his company and signed on with Al Haymon's Premier Boxing Champions.

“It’s not something I would have predicted,” said Arum to Gareth Davies of The Telegraph. “Andy is a pretty good fighter. He has fast hands and quick feet. But he has absolutely no punch.

“He was in with a lot of guys who couldn’t spell fight, and he beat them, but he couldn’t knock them out. The fact he knocked out a fighter like Joshua, who I had seen on television and in person against Joseph Parker, it shocked me.

“Andy Ruiz is a lovely guy, but he’s no Wladimir Klitschko. If Joshua was able to survive Klitschko, who can punch, and knock him out, how the hell does Ruiz beat him? Unless it wasn’t Joshua in the ring. Now that’s something that can happen. Maybe he didn’t train hard enough. Maybe he suffered an injury. When something like this happens, there may never be that Joshua again.”

Now Joshua is going to face Ruiz again. The British star has exercised an immediate rematch clause - with the second bout to take place in the fall.

And Arum thinks his promoter, Eddie Hearn, has gone bonkers to allow that to happen.

“It’s the dumbest thing from the standpoint of a young fighter, who Joshua is, who you want to bring back and recover. The idea you’d put him back in with Ruiz is insane. Give him some fights," Arum said.

“Forget about the titles. The titles will always be there. Joshua is a great personality. He shouldn’t go back with Andy Ruiz. Any real ­boxing guy would tell you that. ­Unfortunately, his promoter is not a boxing guy.

And even if Joshua gets revenge, Arum explains that Joshua will never be the same fighter.

“He could beat Ruiz, but he’ll never be the same. So much of boxing is mental. Opponents will never give him the respect he would have got before. Nobody could beat Mike Tyson until Buster Douglas. Then guys like Evander Holyfield realised that they would have a good chance with Mike because they weren’t intimidated," Arum said.

“They brought him along ­terrifically well. People recognised him as the best heavyweight or one of the best. But if Andy Ruiz can knock him down four times, ­anyone can.

“If they put him in with Ruiz, it’s silly. If it was a 12-round fight and Ruiz had won on points, that would be different. But he lost in a devastating way to Ruiz. He got beat and knocked out. It wasn’t a lucky punch. He got knocked down four times. Don’t put him in with the same guy until you’ve rebuilt him and rebuilt his confidence.”

[QUOTE=Mexican_Puppet;19820560]Wilder has bad defense and is wild, Joshua counters can put him to sleep Wilder was K.Od before the referee helped him[/QUOTE] LOL!! Wilder has a bad defense now. I really like Andy but Wilder isnt like AJ who has…

[QUOTE=Fanofreason;19822272]Problem is Joshua has been fighting Journeyman in his world title fights. I mean he won a title from Charles Martin. Ruiz is not even a top guy, and he destroyed AJ. You guys are not realizing AJ got taken…

With the cash he earns and the status he has, he does have to rematch him. And if he doesn’t win at the least he probably needs to take a few years off

[QUOTE=OldTerry;19820243]If Ruiz was able to knock Joshua down four times and hurt him then Joshua doesn't stand a chance of beating Wilder unless he jumps on him at the opening bell and knocks him out. That is not likely to…

[QUOTE=joe strong;19819517]Maybe If Uncle Bob didn't bury Ruiz's career like Don King did with so many fighters he would still have him in his stable. Ruiz gets 2 fights under Haymon's guidance & he gets a televised fight against Dimitrenko…