Arum: Jared Anderson Is The Unsung Hero Of Fury's Victory Against Wilder

Jared Anderson has won each of his first three professional fights by first-round knockout.

Bob Arum was most impressed, though, by what Anderson showed him in the gym earlier this year. Arum watched numerous sparring sessions between the heavyweight prospect his company promotes and Tyson Fury at Top Rank’s gym in Las Vegas.

The 20-year-old Anderson, who’ll return to the ring Tuesday night in Las Vegas, was Fury’s primary sparring partner for the big Brit’s rematch against Deontay Wilder. It was the 6-feet-4, 235-pound Anderson, according to Arum, that tested the 6-feet-9, 273-pound Fury in the gym and prepared the newly crowned WBC champion to implement the game plan Fury’s new trainer, Javan “Sugar Hill” Steward, designed for him to beat the hard-hitting Wilder. 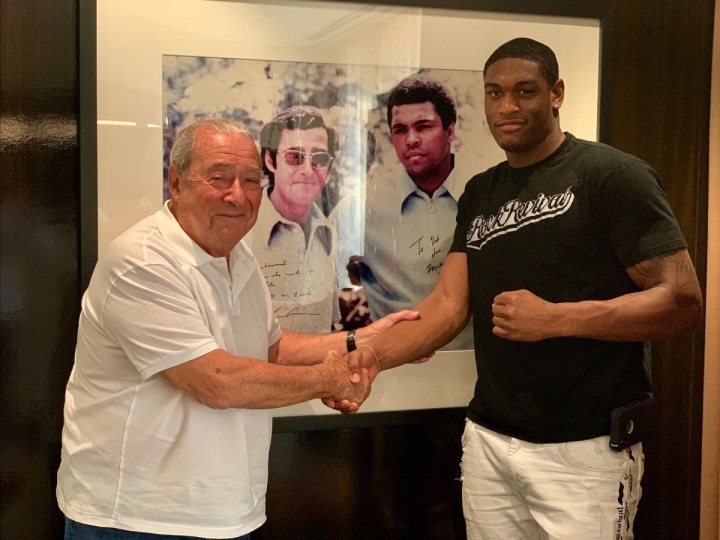 Fury’s intense preparation enabled him to overwhelm Wilder with pressure and physicality February 22 at MGM Grand Garden Arena in Las Vegas. England’s Fury (30-0-1, 21 KOs) knocked his rival to the canvas twice – once apiece in the third and fifth rounds – on his way to a seventh-round stoppage of the previously undefeated Wilder (42-1-1, 41 KOs).

“Jared Anderson is the unsung hero of Fury’s victory against Wilder,” Arum told BoxingScene.com. “Because Fury told me that this kid was unbelievable, that he’s largely responsible for how well Tyson Fury performed in the fight. ‘Sugar Hill’ Steward had this plan for Tyson Fury, and he needed a guy who could move, who’s big and so forth, and could give Fury a battle. Virtually every day, Jared sparred with him. I saw at least four sparring sessions with the two of them, and he really earned his stripes with Fury.”

Anderson (3-0, 3 KOs), of Toledo, Ohio, is set to square off against Johnnie Langston (8-2, 3 KOs), of Sarasota, Florida, in a six-round heavyweight bout ESPN will televise live Tuesday night from MGM Grand Conference Center in Las Vegas. Langston, a 30-year-old southpaw who also has fought at cruiserweight, has not been knocked out in 10 professional fights.

Anderson-Langston will be one of five fights that’ll air prior to the main event – a 10-round, non-title bout between WBO featherweight champ Shakur Stevenson (13-0, 7 KOs) and Felix Caraballo (13-1-2, 9 KOs). ESPN’s coverage of the first televised, post-pandemic boxing card in the United States is scheduled to begin at 7 p.m. ET/4 p.m. PT.

Kudos and good luck in the future.

We've not heard the last of many unsung heroes.

Good publicity for the kid