Arum: I'll Explain Financial Implications Of Rematch To Lopez, Loma; Up To Them

If the dollars make sense and both boxers want it, Bob Arum would have no problem putting together a Teofimo Lopez-Vasiliy Lomachenko rematch.

Lomachenko didn’t request a rematch clause before agreeing to oppose Lopez in a lightweight title unification fight Saturday night in Las Vegas. Lopez expressed during a post-fight press conference that he doesn’t see the need to fight the former three-division champion again because he defeated Lomachenko convincingly in their 12-round fight, which he won by unanimous decision at MGM Grand Conference Center.

“That’s up to the fighters at this point,” Arum told BoxingScene.com. ‘I will point out to the fighters what the financial implications are for doing a rematch. And then, if they wanna do it, that’s fine. If they don’t wanna do it, that’s fine, too. That’s how it works. The Don King era is over, where the fighters are told what to do. I’ll sit down with them, with both sides. I’ll explain to them where the bucks are, because that’s what they care about, and then they’ll determine what they wanna do.” 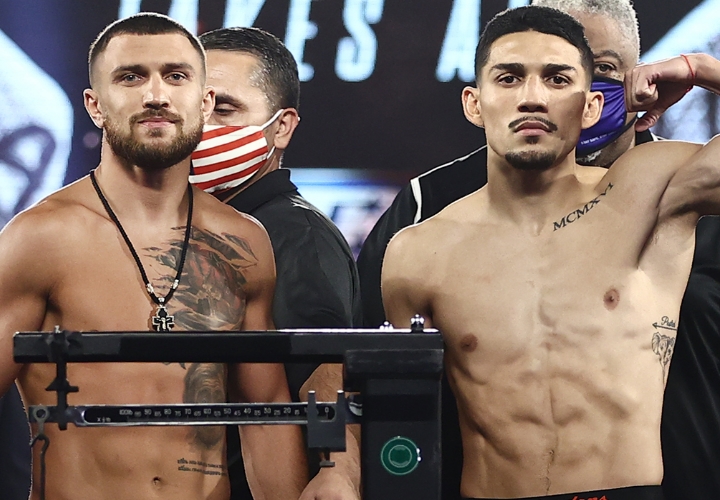 Lomachenko’s manager, Egis Klimas, told ESPN.com on Tuesday that the Ukrainian southpaw wants a rematch once he is cleared to return from shoulder surgery performed Monday. The 32-year-old Lomachenko (14-2, 10 KOs) won’t be able to train until at least the end of January.

An average of 2,729,000 viewers tuned in for their 12-round fight live on ESPN, which made it the most-watched boxing match on American television in more than three years (https://www.boxingscene.com/lopez-lomachenko-fight-peaked-2898000-viewers-averaged-2729000-million--152608). Lomachenko mounted a comeback in the second half of their fight, which earned him four of the final six rounds on judge Tim Cheatham’s scorecard (116-112).

Klimas also informed ESPN.com that Anatoly Lomachenko, Vasiliy’s father/trainer, wanted his son to postpone the Lopez fight due to the pain he felt in his right shoulder while training. Arum was surprised to learn of Lomachenko’s shoulder injury once he was told the two-time Olympic gold medalist had surgery.

Lomachenko had a chipped piece of cartilage repaired in his right shoulder Monday night. He was treated for a badly bruised right rotator cuff while preparing to face Lopez, including an injection to alleviate pain.

If Lopez pursues options other than a rematch, Arum will await word on whether Lomachenko wants to remain at the lightweight limit or drop down five pounds to return to the junior lightweight division for his next fight.

“I don’t give him directions about, physically, how he feels or anything,” Arum said. “He’s gonna tell me about what weight class he wants to fight in. And then I’ll explain to him the opportunities, or the lack of opportunities, in each weight class. That’s how it works.”

Lopez also is considering vacating his four championships to compete at the junior welterweight limit of 140 pounds.

[QUOTE=Squared.Circle;20836761]I did explain why I think Loma was so inactive in the first half lol he was making López miss and letting him press the action to try and tire him out. Probably watched the fight with the Japanese dude…

[QUOTE=Squared.Circle;20836766]A fight isn't won until the result is announced. If López could have chucked in some "vicious counters", he[B] would have[/B].[/QUOTE] didn't need to...:pat:

[QUOTE=Inspired;20836660]like i said, lopez had already won the fight by that point. He didn't need any 'viscious counters'. He was comfortably in front.[/QUOTE] A fight isn't won until the result is announced. If López could have chucked in some "vicious…

[QUOTE=Ake-Dawg;20836569]So you're doing everything but explaining why you think Loma didnt throw many punches in rounds 1-6. Further, its a proven fact that fighters lose steam on their punches in the later rounds. Why did the special guy not look…