Arum: If Kovalev Beats Canelo - He's Back To ESPN, NO DAZN!

As reported by Idec, they worked out the most significant remaining contractual issue Wednesday, a fact first reported by Sports Illustrated’s Chris Mannix. An official announcement will be made soon to confirm a 12-round, 175-pound title fight DAZN will stream live in the United States.

The Athletic’s Mike Coppinger first reported Sunday that the deal was nearing completion. The aforementioned lingering issue required three more days of negotiations to settle, but there’s nothing now expected to prevent them from moving forward with the Alvarez-Kovalev fight. 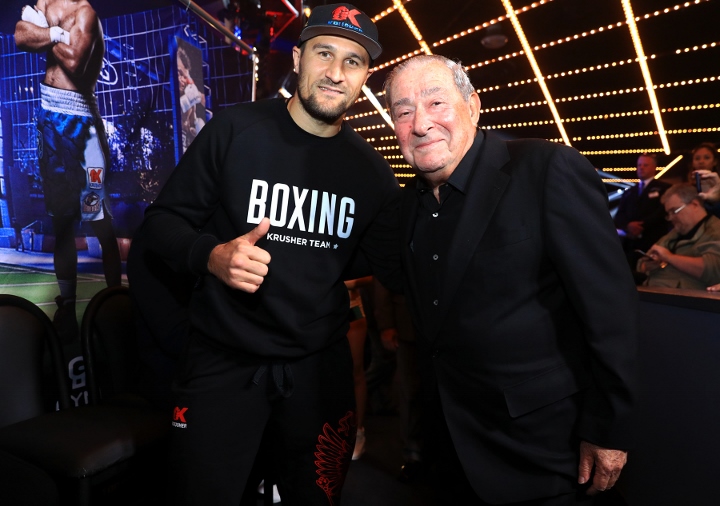 It was also reported that Kovalev received a 3 fight deal as part of the agreement to face Alvarez.

BoxingScene.com spoke to Bob Arum after the Tyson Fury-Otto Wallin press conference and the Top Rank CEO clarified that the 3 fight contract will only be valid if Kovalev loses to Alvarez.

"Well that is not correct," said Arum when asked about the report. "What is correct is that we will wait for the announcement for the fight but Kovalev, if he loses to Canelo, he will have two come back fights (on DAZN) but if he wins he goes back to Top Rank and ESPN."

As far as the fight itself he admits that it will be a tough fight for Kovalev, who he co-promotes with Main Events. Even though Kovalev is a big light heavyweight and Canelo is a natural middleweight, the Russian has shown vulnerability to a good body attack.

"Well Canelo Alvarez is a tough opponent for Kovalev because even though Kovalev is so much bigger and has that great left jab, Kovalev doesn't take it that well to the body. Andre Ward showed that. Yarde showed that. The one thing Canelo has as his great weapon is his body punching so we'll have to see - but that is a world class fight, Canelo Alvarez and Sergey Kovalev," Arum told BoxingScene.com.

[QUOTE=I'm Widdit!;20054363]Don’t feed the casual fans. That poster said Canelo fought “Championship” fights at 155 being a “natural Middleweight.” These dummies are so confused they’d probably say “Canelo vs Cotto or Khan at the full 160 limit would’ve been more…