Arum: If Crawford Wants 3-4 Fights a Year - We Have The Dates

LAS VEGAS – Bob Arum is prone to hyperbole, particularly in the immediate aftermath of one of his fighter’s victories.

As previously reported on BoxingScene.com, the Hall-of-Fame promoter was so impressed with what he witnessed from Terence Crawford on Saturday night, Arum compared the three-division champion to one of the best boxers in the history of the sport following Crawford’s ninth-round stoppage of Jeff Horn.

“He’s a terrific fighter,” Arum said during the post-fight press conference at MGM Grand. “I’ve told everybody. I compare him – and it’s the highest praise that I could give a fighter, a welterweight, the mid-level weight divisions – that he reminds me of ‘Sugar’ Ray Leonard. And that, to me, is a great, great compliment because I always thought that Leonard was the best. And this guy is equal, if not better, than Ray was.” 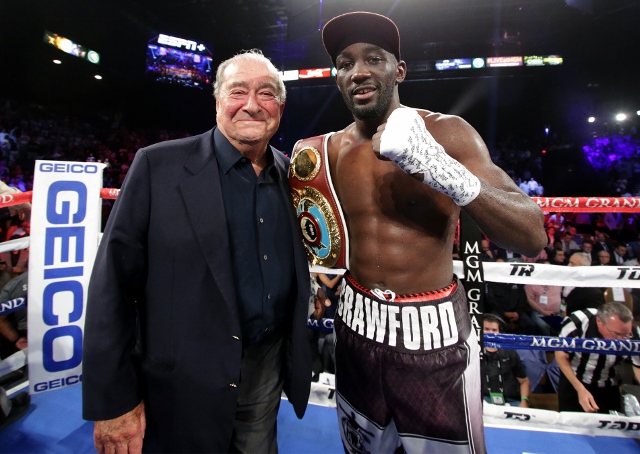 The 30-year-old Crawford, seated beside Arum, appreciated his promoter’s praise.

“That’s a big accomplishment,” said Crawford, who didn’t compare himself to Leonard.

The legendary Leonard won world titles in three weight classes. Before losing the last two fights during the twilight of his career to Terry Norris and Hector Camacho, Leonard went 36-1-1 and knocked out 25 of his opponents.

Leonard, 62, won huge fights against Wilfred Benitez, Roberto Duran, Thomas Hearns and Marvin Hagler. He was named the Boxing Writers Association of America’s “Fighter of the Year” for 1976 (shared), 1979 and 1981, and was inducted into the International Boxing Hall of Fame in 1997.

[QUOTE=Scipio2009;18852672]So rather than simply get your free trial, ESPN+ already got $50 from you? Good to know, lol. How many competitive fights do you honestly expect to see for your $50 on ESPN+ (Competitive is relative, so for conversation's sake,…

[QUOTE=Butch.McRae;18852518]Dude he just made $3 million for this fight not per fight. Prior high was $1.7 million. And honestly cut the nonsense. You have to be in his camp or something. You carry that torch on all the articles about…

[QUOTE=killakali;18852496]Your math is terrible and apparently you get your dates mixed up to. Your $12 was for June you have to fork over another $12 for the Garcia Easter fight in July so now you’re at 24. Then you completely…

[QUOTE=killakali;18852501]Actually you’re the delusional one you’re trying to say that Barclays doesn’t give away comps when everybody knows it’s true a lot of my friends have gotten comps. And then you try to act like Danny Garcia and Keith Thurman…

[QUOTE=Butch.McRae;18851866]He's delusional lol[/QUOTE] Actually you’re the delusional one you’re trying to say that Barclays doesn’t give away comps when everybody knows it’s true a lot of my friends have gotten comps. And then you try to act like Danny Garcia…