Bob Arum knew before the night began that in Emanuel Navarrete, he had a hot commodity in the 122-pound sweepstakes.

The manner in which Saturday’s ESPN-televised main event ended made the Hall of Fame promoter realize he also had a solution to a major Las Vegas card badly in need of support.

Among the first into the ring was Arum, who passed along the good news to Navarrete and his team.

“That was sensational, now stay ready,” Arum told Navarrete (28-1, 24KOs) following the second defense of his super bantamweight title on Saturday. “We’re going to bring you right back on Sept. 14 in Las Vegas.” 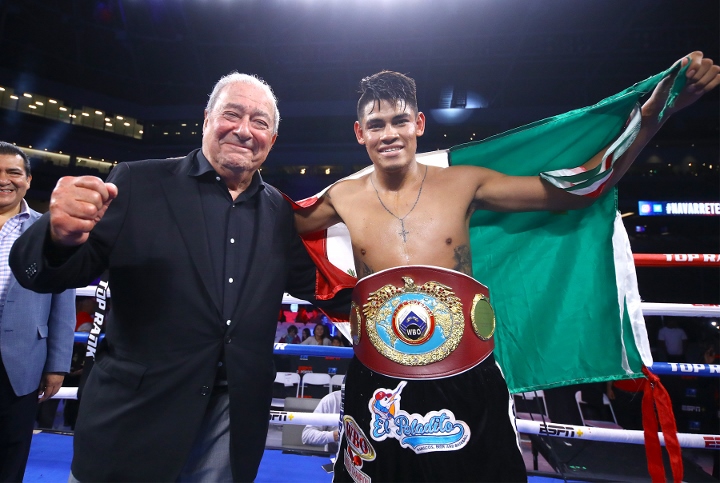 None of the options really push the card towards enticing the targeted Mexican fan base, particularly a main event between two heavyweights from Europe.

Navarrete’s early night at the office goes a long way towards solving that problem. It also keeps him active.

“Mr. Arum promised me that we can come back on the September 14 card that is headlined by Tyson Fury,” Navarrete noted to ESPN’s Crystina Poncher after Saturday’s win, his 23rd straight since suffering his lone loss in his 6th pro fight. “I would love to come back and fight on that card and in front of all of the Mexican fans.”

There’s nothing more his handlers would love than for that vision to become a reality.

“He is Mexican. He’s proud to be Mexican,” noted Arum after the bout of Navarrete, who is co-promoted by Top Rank and Zanfer Promotions. “September 14 is Mexican Independence weekend and the best fighter in Mexico will be there to defend his title.”

1. Canelo 2. Estrada Then you can debate between Nery, LSC, Berchelt and Navarrette.

arum says the dumbest ****. im high on vaquero, too, but JUAN FRANCESCO ESTRADA and a few others come to mind.

[QUOTE=Claude Palle;19996708]Isn't Mr. Navarrette a champion? Should not his opponent be worthy?[/QUOTE] There’s not enough money to entice even a worthy opponent to take the fight with Navarrete on less than a month notice