Arum: Fury is Better At Promoting Than The Promoters

Having done this for more than 50 years, Bob Arum can’t help but default to hyperbole for any of his events.

There’s something different about this weekend’s collaboration with England’s Tyson Fury, however, that allows him to carry a far more relaxed demeanor throughout the buildup.

“The job is a promoter as Frank (Warren, Fury’s co-promoter) would attest can be very difficult,” the Hall of Fame promoter noted during Wednesday’s final pre-fight press conference for Fury’s showdown versus Germany’s Tom Schwarz at MGM Grand in Las Vegas, Nev. “Many times, you get guys who are stars that are reluctant to talk to the press, to meet with the press. You have to give them scripts.

“With Tyson, you never had to do that. There's no need to groom him; he’s better at this than we are. It’s tremendous.” 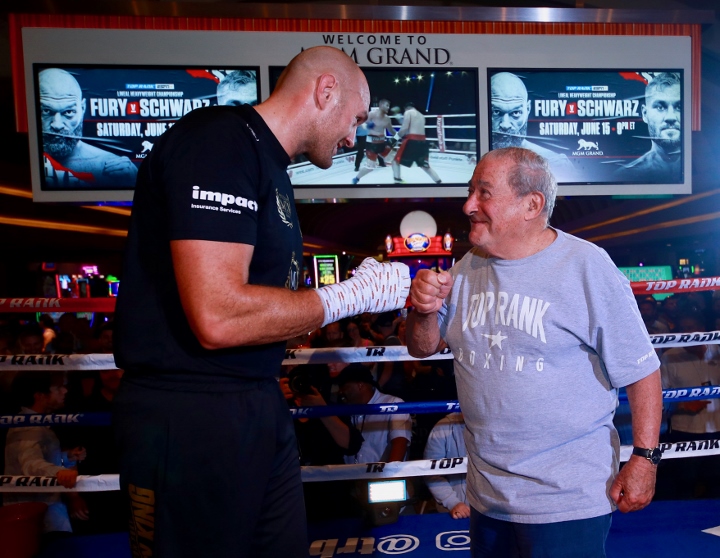 Fury (27-0-1, 19KOs) manages to become the talk of the town no matter the scenario. It’s hardly a surprise that he’s managed to find himself deep in his element in his Vegas debut, which also marks the first of a lucrative multi-fight deal with ESPN+ which will stream Saturday’s show.

“I feel it’s been warming,” insists Fury of the reception he’s received. “I’m surprised, people who don’t speak English or even watch sports have come up to ask for autographs and pictures. It’s humbling quite honestly.

“The Deontay Wilder fight helped my profile in the United States. Now we’re here to become even bigger.”

Saturday’s fight versus Schwarz (24-0, 16KOs)—who makes his U.S. debut and fights outside of Germany for just the second time in his career—is Fury’s first piece of ring action since his thrilling 12-round draw with Wilder last December.

In what became a proper metaphor for having turned around his life in general, Fury dramatically rose from the deck and finished the fight not just on his feet but having regained momentum by the final bell.

Plans were in place to do it all again, until Fury and Warren reversed course at the 11th hour, instead signing a co-promotional pact with Top Rank to be showcased on the ESPN platform. Even before stepping into the ring on Saturday, it seems that part two with Wilder is very much back in the mix, with the two sides reportedly coming to terms for a fight in the early part of 2020.

As evidenced by the massive upset scored by Andy Ruiz over Anthony Joshua earlier this month, talking about fights down the road before taking care of present-day business can ultimately prove a waste of time. Still, Fury’s bold personality and all that is currently happening in the heavyweight division has created a buzz that has exceeded even the lofty expectations put forth by the event’s handlers.

“I’m delighted with the reception this fight has received,” insists Arum. “We have a few hundred tickets left at the MGM. By fight night they’ll all be gone. We also believe we’re going to get a record number of subscribers for this great card on ESPN+.”

[QUOTE=OPS;19827202]The fact of the matter is no matter what Fury did for 9 or how many rounds, what we do know is when Wilder connected, Fury was dropped. Fury didn't drop Wilder. With Wilder's added weight, best believe Fury back…

He talks well but his fights will usually be quite boring unless he's in there with one of the top guys. They clearly bring out the best in him.

The fact of the matter is no matter what Fury did for 9 or how many rounds, what we do know is when Wilder connected, Fury was dropped. Fury didn't drop Wilder. With Wilder's added weight, best believe Fury back…

[QUOTE=OPS;19826413]Let me ask you this. What picture replays in your mind after the Wilder - Fury fight. That feather fist slapping Fury does for 12 rounds or the moment Fury chin got checked and he hit the canvas. #APictureIsWorthAThousandWords. ##DropsMic[/QUOTE]…

I truly believe boxers like Fury and Wilder are a promoters dream, they do need managers especially Wilder who for me is pretty much dumb, but they are one of the best self promoters in the sport. Anyone that can…