Top Rank's CEO Bob Arum, who co-promotes WBC heavyweight champion Tyson Fury, is very confident that his star boxer is legally capable of fighting on December 5 in the UK.

The two potential opponents being mentioned are Carlos Takam and Agit Kabayel.

Back in February, Fury stopped Deontay Wilder in seven rounds to capture the WBC title at the MGM Grand in Las Vegas.

Wilder would then exercise an immediate rematch clause, to force a third meeting. 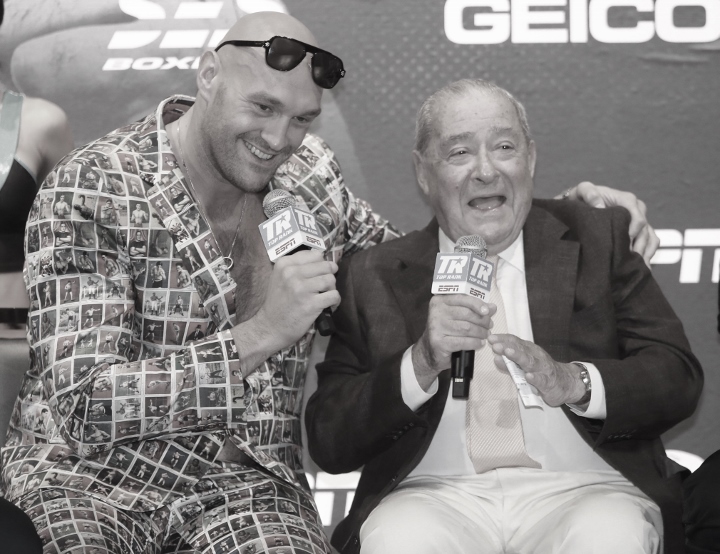 The third bout was initially scheduled to take place in July, but it was pushed back due to the coronavirus pandemic.

But without a live crowd, it became extremely difficult for the two sides to finalize a concrete date and venue.

The February rematch had a live gate of $17 million at the MGM Grand - which leaves a lot of money on the table if the promoters went forward without spectators.

According to Fury and his handlers, Wilder's rematch clause officially expired a few weeks ago - which allows them to forward with other plans.

He believes Wilder still holds a valid contract for a trilogy - which prevents Fury from fighting someone else.

Arum doubts Finkel has even reviewed the legal language in the contract.

"Fury has Robert Davis as his lawyer in the UK. He's read the contract. The contract has expired. It's clear. Shelly can say what he wants. You know the thing that's crazy about it is, the last time I talked to Shelly Finkel was the night of the fight after Wilder had been beaten," Arum told IFL TV.

"And I haven't talked to him since. Shelly hides in the bushes and then when something that he sees as being averse to his fighter or himself happens, then he comes out and makes statements. I am sure, I am absolutely sure, not knowing, but I think Shelly Finkel has never read the contract."

[QUOTE=Silver Spear;20842226]Ya I guess it will come down to who's "opinion" is correct in the eyes of the judge. If there was a time frame given to the rematch and that time frame has clearly passed even using Covid as…

[QUOTE=Ake-Dawg;20842034]He did refer to Arums statement that the contract had expired as "his opinion". Not quite a pounce but when it comes to contracts the only individual opinion that matters is the judge should legal action be taken. Seems like…

[QUOTE=Silver Spear;20841936]I agree. If there is anyone in the world that cares about what you say and how you say it, it is a lawyer. They would pounce at any chance at getting their aha moment just because someone worded…

Wilder will get revenge in historic fashion by this time making sure Fury leaves the ring on a stretcher!