Arum: Dana White's 'Cowboy Behavior' Doesn't Do Anybody Any Good

Bob Arum hopes anyone that participates in the three UFC cards scheduled for next month in Jacksonville, Florida, leaves those events as healthy as when he or she arrives.

The outspoken promoter just wishes Dana White would exhibit more caution and patience during this devastating pandemic. Arum was very critical of White when UFC’s president tried to bring UFC 249 to Tachi Palace Casino Resort in Lemoore, California, near Fresno, on April 18.

Political pressure led ESPN executives to instruct White to postpone UFC 249, a pay-per-view show that ESPN is contracted to distribute. UFC 249 since has been rescheduled for May 9. 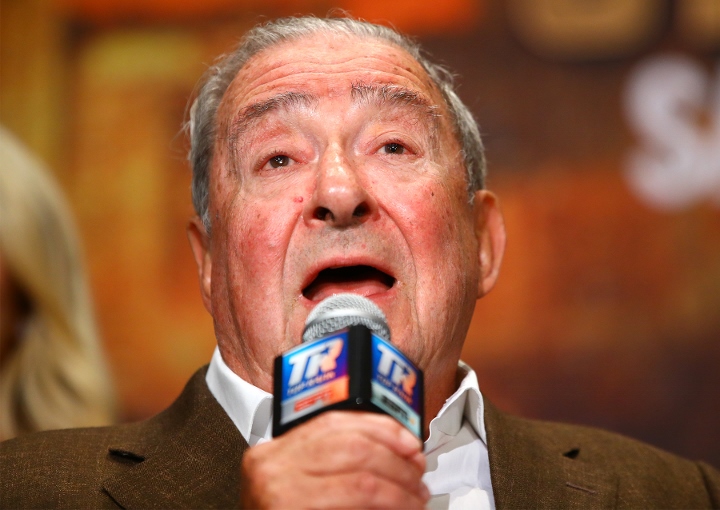 The 88-year-old Arum feels White hastily has made another mistake by agreeing to stage UFC 249 and two more shows May 13 and May 16 at VyStar Veterans Memorial Arena in Jacksonville. Each of those three UFC events in Jacksonville will take place without fans in attendance.

“Good luck to them,” Arum told BoxingScene.com. “I just hope that they’re not endangering the safety of anyone. But this kind of cowboy behavior doesn’t do anybody any good.”

Arum is exploring putting together boxing cards without fans in venues, but not until the second half of June at the absolute earliest.

“We’re looking now with Nevada, which we’ll do in a sensible way, or California,” Arum said. “We’re working with [Nevada’s] Bob Bennett and [California’s] Andy Foster, and we’re talking to the Texas commission. We’re only gonna do this if it’s safe for the fighters and everyone involved, and if it’s approved by the medical authorities. We’re not gonna be cowboys, like Dana White. I don’t wanna get politics involved, but I have really very little respect for Dana and what he’s doing.”

While White has drawn praise from some for aggressively attempting to get back to business, Arum believes boxing should take its cue from leaders in other sports.

“I think the behavior of people in sports we should be following,” Arum said, “are Adam Silver of the NBA, Roger Goodell of the NFL, people who are proceeding cautiously and safely, not people who are acting like cowboys. For example, [the UFC] wanted to do this fight in California and they were prevented by the governor [Gavin Newsom], and by senator [Dianne] Feinstein going to ESPN and having Dana pull [the plug].

“It turned out one of the fighters, in fact, tested positive afterwards for coronavirus. You know, if we get something like that on one of Dana’s shows, and God forbid there’s a serious incident of spreading the disease, it doesn’t do well for anybody who’s involved with sports.”

Arum referred to UFC welterweight Lyman Good, who revealed last week in an interview with ESPN.com that he tested positive for coronavirus.

Good was scheduled to battle Belal Muhammad at UFC 249 when it was supposed to take place at Barclays Center in Brooklyn. New York’s Good initially cited an injury April 4 as the reason he withdrew from the fight, but he later acknowledged that he pulled out of the bout because he tested positive for COVID-19.

Meanwhile, Arum and other Top Rank executives have investigated staging shows in Florida. Arum doesn’t think, though, that’s where Las Vegas-based Top Rank will put on its first show in a studio setting or a nearly empty arena.

“Right now, we’re concentrating on California and Nevada, a little bit in Texas,” Arum said. “We may very well go into Florida. But it would make it much easier for us to open in Nevada and California, based on where the company is situated.”

Dana is the canary in the mine. My feeling is it does great ratings and the gamble pays off. That would be a great thing for boxing. The virus won’t be gone before a vaccine is around. At some point…

He may turn out to be right, but either way I doubt Arum is saying this from a moralistic standpoint. He just hates MMA and is salty that the UFC is going to be running unopposed, especially when its on…

[QUOTE=PunchyPotorff;20548926]Quote: Originally Posted by PunchyPotorff View Post Arum is right... and let me say I don't often agree with Unkee Bob. White is just way too headstrong, tries to push forward without thinking things thru. That is NO way for…

Quote: Originally Posted by PunchyPotorff View Post Arum is right... and let me say I don't often agree with Unkee Bob. White is just way too headstrong, tries to push forward without thinking things thru. That is NO way for…