Arum: Crawford Would Take Out Spence in Same Number of Rounds as Brook

Even if Crawford wanted Spence next, his outspoken promoter doesn’t think the most anticipated showdown within the welterweight division is a realistic option for Crawford’s return to the ring in 2021. Bob Arum claims Spence hasn’t agreed to face Crawford because he knows the unbeaten WBO welterweight champion is too much for him.

“Errol Spence will try to avoid Terence Crawford as long as he can, because he knows he can’t beat Terence Crawford,” Arum told ESPN. “You saw the performance [against Brook]. He’ll take out Errol Spence in about the same number of rounds that he took out Kell Brook.” 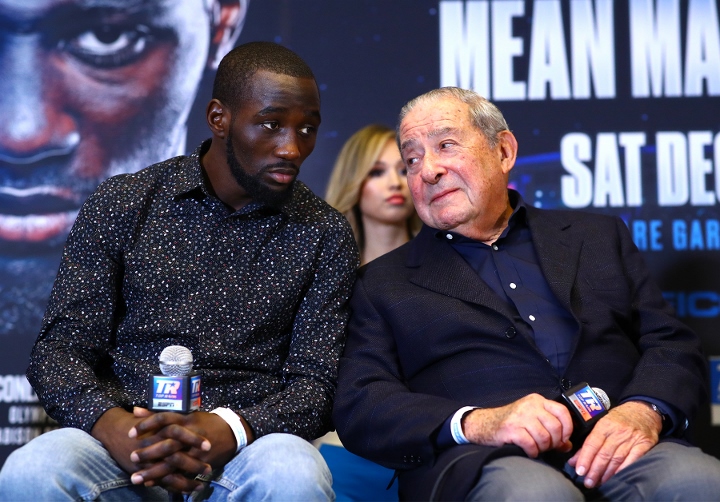 Crawford changed the course of their fight when he rocked Brook with a right hook early in the fourth round of what had been a closely contested, tactical battle through three rounds.

Brook was ahead of Crawford on the scorecards of judges Dave Moretti (29-28) and Benoit Roussel (29-28) entering that fateful fourth round.

Crawford was in front, 29-28, according to judge Patricia Morse Jarman.

Once Crawford connected with the shot that sent Brook stumbling into the ropes, the three-division champion pounced on his disoriented opponent. Referee Tony Weeks administered a count because Brook was held up by the ropes.

Crawford unloaded several power punches as soon as the action resumed, including a straight left hand that knocked Brook into the ropes again. That’s when Weeks stepped between them to stop their scheduled 12-round title fight at 1:14 of the fourth round.

The 33-year-old Crawford (37-0, 28 KOs), of Omaha, Nebraska, made the fourth defense of his WBO welterweight title by beating Brook (39-3, 27 KOs), a former IBF welterweight champ from Sheffield, England.

Spence, meanwhile, will return to the ring December 5. The 30-year-old Spence (26-0, 21 KOs), a southpaw from DeSoto, Texas, will defend his IBF and WBC welterweight titles that night against Philadelphia’s Danny Garcia (36-2, 21 KOs) in a FOX Sports Pay-Per-View main event at AT&T Stadium in Arlington, Texas.

Arum Haymon Pandemic Money Ego, its not easy for all these handicaps to come together to put on a superfight.

[QUOTE=Blkseez;20899564]Facts!! These guys hoping bud never fights spence. They are either on the spence payroll or too dumb to get paid for it.[/QUOTE] Agreed. I always keep saying Team Spence will make a fight with Crawford, IF they see substantial…

[QUOTE=rckdees;20899155]The problem is this scumbag thinks he’s going to live forever[/QUOTE] The most evil people live longer than most. That’s why Clive Davis (music executive) is still alive.

Well do it then.. :theyareon

[QUOTE=Timur78;20899364]On the other hand... Crawford is earning 4-6m per fight and will comfortably retire rich HOF/ATG P4P, not having a single thing to prove to the likes of you. So who's really dumb?![/QUOTE] Facts!! These guys hoping bud never fights…