Arum, Crawford To Meet Next Month To Discuss His Next Fight

The date and site of that bout will remain undetermined until the WBO welterweight champion meets with promoter Bob Arum next month in Las Vegas. Arum told BoxingScene.com that he plans to discuss Crawford’s return to the ring with Crawford and his team during the week of the Tyson Fury-Otto Wallin heavyweight fight September 14 at T-Mobile Arena.

“At that point,” Arum said, “we’ll sit down with him and hope to work everything out.” 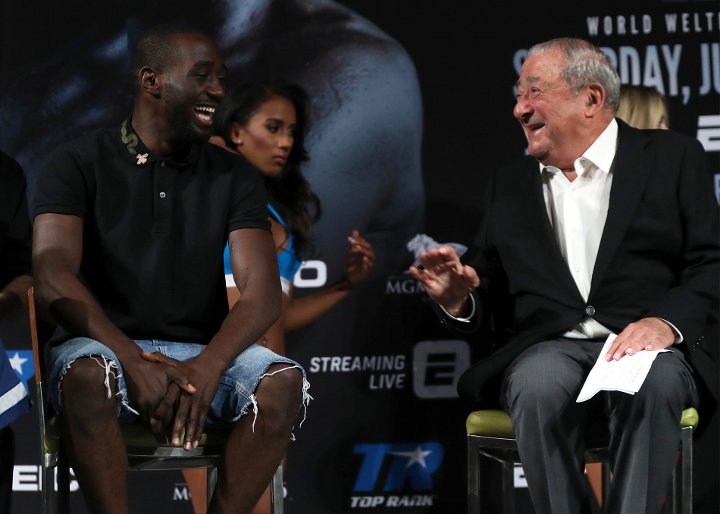 The 31-year-old Crawford last fought April 20, when he stopped England’s Amir Khan (34-5, 21 KOs) in the sixth round of their scheduled 12-round title fight at Madison Square Garden in New York.

Among the options Arum expects to present to Crawford will be to defend his title versus Kavaliauskas at some point in November in Omaha, Nebraska, Crawford’s hometown, or to schedule that fight for December 14 at Madison Square Garden. Executives for ESPN, with which Arum’s Top Rank Inc. has an exclusive content agreement, have discussed the possibility of having a card headlined by Crawford-Kavaliauskas air immediately after the network’s Heisman Trophy show that night.

Crawford-Kavaliauskas would be a tougher sell at Madison Square Garden than in Omaha, however, which could lead to another fight for Crawford in his hometown.

The three-division champion has regularly drawn crowds in excess of 10,000 to CHI Health Center in downtown Omaha. Crawford hasn’t fought in Omaha since last October 13, when he stopped previously unbeaten Jose Benavidez Jr. (27-1, 18 KOs) in the 12th round.

Whenever and wherever Crawford-Kavaliauskas takes place, Arum anticipates Crawford fighting a second time in 2019.

“He’s a fighter,” Arum said. “He loves to fight, loves to train. I’m pretty sure we’ll be able to work something out, so that he’ll fight before the end of this year. That’s the plan.”

Cut the Sh#t Arum it is Mean Machine Edigieous Kavalaalalias whatever his name is because that is what is available and AFFORDABLE I feel any fight can be made...if you're willing to pay up and make the full investment. Going…

Spence doesn’t want the fight??? According to who??? Go to Youtube, Bro. Spence said it in the press conference and in an interview that he wants all the top welterweights, and he included Crawford. Spence doesn’t have a defining victory…

[QUOTE=STREET CLEANER;20004761]At this stage in Crawford's career Collazo is a clear 2 steps back. Trash fight.[/QUOTE] How do you figure? What are you basing that on? Collazo is coming off a two-year win streak and if he beats Benavidez like…

[QUOTE=revelated;20003434]Why not? Quality fight, that. Especially since Collazo is rugged and durable. He might quit if Crawford low blows him though. Wrong. Arum is pissed off because Crawford has asterisks and can't seem to get a clear, clean crisp victory…