Arum Backs Fury KO Claims: He Will Finish Wilder Off This Time!

Bob Arum was more concerned about the cut which threatened the status of Tyson Fury’s last fight than the Brit’s claims of going for a knockout in his next one.

England’s Fury (29-0-1, 20KOs) has claimed to anyone who will listen that his upcoming heavyweight title fight rematch with Alabama’s Deontay Wilder (42-0-1, 41KOs) will not last more than two rounds. Such a feat would match the quickest knockout he has scored in the past 10 years, which came just two fights ago in a six-minute drubbing of Germany’s unbeaten but untested heavyweight Tom Schwarz last June.

Wilder has only been down one time in his career, and rocked on just a small handful of occasions over the course of his 11-plus year career, which has included 10 successful heavyweight title defenses. 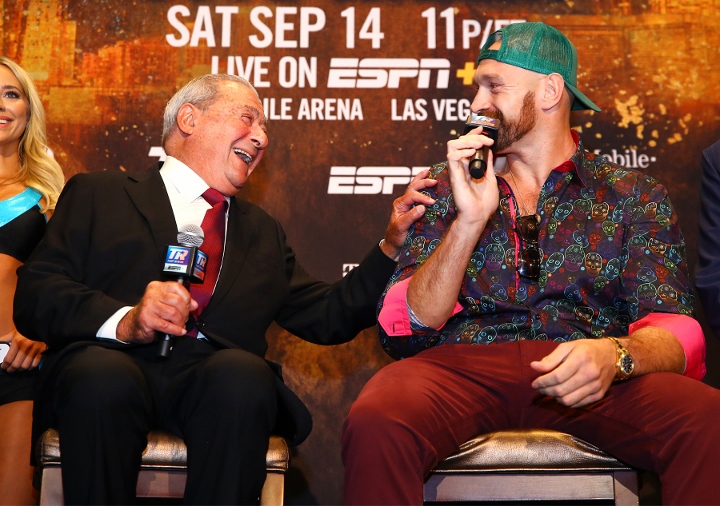 Conversely, Fury enters the second of their two-fight set as the perceived skill boxer. Yet he insists their February 22 rematch will end with Wilder flat on his back and staring at the ceiling of the MGM Grand Garden Arena in Las Vegas, Nevada.  It might not sound logical to the average fan, but makes perfect sense to his Hall of Fame promoter.

“I have confidence in Tyson,” Arum theorized during a recent media conference call to discuss their Pay-Per-View headliner, which will be distributed in a joint effort between ESPN and Fox Sports. “You know… there are guys who say they are going to knock out their opponent, and it’s like baseball players getting up to the plate trying to hit a home run.

“Anyone who knows baseball, will say the guy who looks to make contact has a better chance of hitting a home run than the guy who is swinging from his heels. Tyson is a great boxer but he has the determination to knock out Wilder.”

Fury has gone as far as to change up his training staff in order to enhance his untapped punching power. The 31-year old retuned to the sport in June 2018 following more than 30 months out of the ring, with now former trainer Ben Davison playing a major role in getting him back in fighting shape and maintaining his unbeaten record.

A few months after his 12-round win over Otto Wallin last September, Fury decided to replace Davison with SugarHill Steward [nee Javon ‘Sugar’ Hill], the nephew of the late, great Emanuel Steward who carries a decades-long reputation of developing punchers. The tradition of the Kronk Gym mentality has been carried on through the younger Steward, with Fury banking on it carrying over into the ring on fight night and with his team confident of his ability to receive what he has spoken into existence.

“It’s not that [Fury] will try to force it,” believes Arum. “It’s not like the first fight when Wilder was in trouble a few times in that fight. He’s not gonna let him off the hook. He’s gonna go for the knockout and finish him off this time.”

[QUOTE=marikudo;20390145]These are two of the most overhyped boxers today. These two cannot compete with the past heavyweight greats.[/QUOTE] Must we always dig up the past to judge the present? We forget that we had a lot of drug cheats back…

[QUOTE=Awhispersecho;20390504]I actually think he is going for the KO too. At least for the 1st couple rounds. I think he feels like he had Wilder hurt/buzzed a couple times in the 1st fight, (he did) and if he just sat…

Fury needs the KO, because the hometown cooking will rob him again.

I actually think he is going for the KO too. At least for the 1st couple rounds. I think he feels like he had Wilder hurt/buzzed a couple times in the 1st fight, (he did) and if he just sat…

Fury isn’t going for a KO , It’s another one of his a Gypsie Mind Trick , Fury a f.ucking Svengali and gets into all his Opponets head has them fighting how he wants them to fight. If Wilder goes…