Two things needed to happen for Artur Beterbiev ahead of his most recent title defense: For it to take place before the holy Ramadan season begins May 5, and for his performance to remind the rest of the light heavyweight division that he’s a major a threat.

Mission accomplished on both fronts—according to everyone, but the winner. 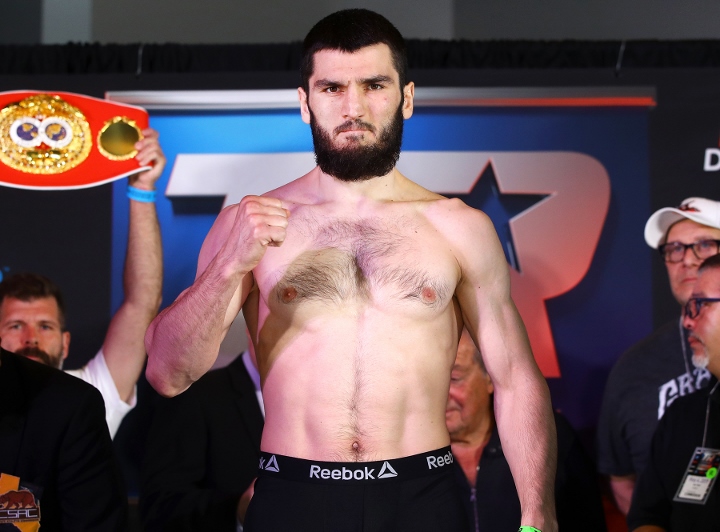 Beterbiev floored Kalajdzic in round three, battering the Serbian challenger the rest of the way through before forcing the stoppage at 0:13 of round five.

“I wasn’t happy with my performance,” Beterbiev said of just his third fight in a span of 19 months. “Maybe my opponent didn’t give me a chance to show all of my talents.”

The sense coming into the bout was that Beterbiev would go on the attack right out the gate. Kalajdzic and his team had the defending titlist scouted out well, but still didn’t have any answers for the incoming attack.

Beterbiev closed the gap in round two, scoring with right hand shots as Kalajdzic played the role of pedestrian contender. The Florida-based light heavyweight returned to the ring in 2018 after having retired two years prior due to chronic hand injuries. A pair of 1st round knockouts preceded Saturday’s title challenge, doing little to prepare him for this moment.

Still, the veteran boxer whose lone previous loss was a controversial split decision at the hands of current top contender Marcus Browne came in with good intentions. What he lacked was the firepower to keep Beterbiev at bay, his 6’2”, 173-pound frame an all-too inviting target for his opponent’s power punches.

A spirited round three quickly turned violently one-way, as Beterbiev rode through a rally to score the bout’s lone knockdown. A right hand caused Kalajdzic to fall into the ropes, doing his best to keep his knee from hitting the canvas but with the referee already ruling an official knockdown.

Enough punishment was absorbed by the 27-year old challenger to receive a visit from the ringside physician in rounds four and five. The latter visit also prompted a stern warning from Dan Stell to show him something or else the fight would be stopped.

The third man stayed true to his word. Beterbiev immediately went on the attack in the opening seconds of round five, with Kalajdzic (24-2, 17KOs) under siege and quickly rescued from further punishment as Snell jumped in to stop the contest.

The win gives Beterbiev (14-0, 14KOs) the second defense of the light heavyweight title he acquired in a 12th round knockout win of Enrico Kölling in Nov. ’17. Inactivity due to past promotional issues have slowed his career to a crawl in recent years, but that is no longer an issue as his debut with Top Rank proved a smashing success.

Now he can look to a very bright future on a platform that serves as a significant stakeholder in the light heavyweight landscape.

“I want unification bouts,” insisted Beterbiev, who fights out of Canada but whom represented his native Russia in the 2008 and 2012 Olympics. “I want to unify the title against all of the champions.”

His next adventure will be a 30-day spiritual journey in honor of Ramadan. None of the other major light heavyweights will have fought by then.

Sergey Kovalev—Beterbiev’s old amateur rival when both came up through the ranks in Russia—is waiting on an official fight date for his mandatory title defense versus unbeaten Anthony Yarde, tentatively slated for early summer.

Oleksandr Gvozdyk scored a 5th round knockout of France’s Doudou Ngumbu in a voluntary title defense this past March. The unbeaten World champion from Ukraine is due a mandatory defense versus Browne. However, Browne is taking on a stay-busy fight versus faded former champ Jean Pascal in June and has taken little initiative in enforcing his mandatory status, which could free up Gvozdyk for any fight of his choosing.

The lone remaining titlist not under the ESPN banner is unbeaten Dmitry Bivol, whom outpointed Joe Smith Jr. this past March and who claims to be a network free agent.

“They’re all makable fights,” said promoter Bob Arum of mixing and matching Beterbiev with any of the light heavyweight titlists.

[QUOTE=_Rexy_;19726640]so I just rewatched this fight...Anyone point out the fact that at the start of the fourth round the ref sent Rod over to the doctor for an extra 10-20 seconds to be examined?[/QUOTE] They did this during the Ancajas-Funai…

[QUOTE=Raggamuffin;19726768]I don’t mind that when it comes to boxing. Those extra seconds don’t save boxers.[/QUOTE] oh I just point out every time it happens because people still go ape**** over Wilder/Ortiz

[QUOTE=_Rexy_;19726640]so I just rewatched this fight...Anyone point out the fact that at the start of the fourth round the ref sent Rod over to the doctor for an extra 10-20 seconds to be examined?[/QUOTE] I don’t mind that when it…

so I just rewatched this fight...Anyone point out the fact that at the start of the fourth round the ref sent Rod over to the doctor for an extra 10-20 seconds to be examined?