Arreola: Wilder Has That Killer Instinct, He Will Knock Joshua Out!

Back in July of 2016, Chris Arreola was stopped in eight rounds by WBC heavyweight champion Deontay Wilder (40-0, 39 KOs).

The two sides are still negotiating the terms and it's not exactly clear if the contest will take place in the fall of 2018 or the first quarter of 2019. 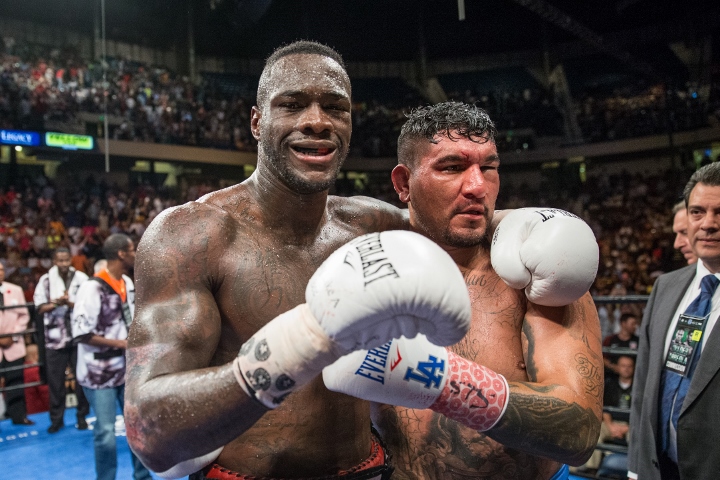 And if Wilder and Joshua collide in the ring - Arreola is confidently siding with the Wilder to win the contest by knockout.

Arreola was far from impressed with Joshua's twelve round unanimous decision victory over Joseph Parker from March.

"Wilder by knockout. And I'm telling you because personally I love a man who has a killer instinct. And he has that. He has that f***ing attitude. If he hurts you, he's going to take you out - because why is he going to p*ssyfoot around? To me, Joshua is just too cautious out there," Arreola told BoxingScene.com.

"[Joshua] is too methodical, he thinks too much, and in his last fight I didn't think that he looked that great. I didn't think he looked great at all. Wilder, we seen how he blasted out Stiverne."

Speaking of Stiverne, Arreola had two fights with the former champion. The first time, Stiverne won a twelve round decision. But in the rematch, Stiverne stopped Arreola in six rounds.

Arreola was very disappointed to see Stiverne get blasted out by Wilder in a single round last year. Stiverne was not in the best physical condition for that fight.

"It gets me mad to see Stiverne get beat up that bad, because he's a better fighter than that. He comes in great shape to fight me and then comes in sh*tty ass shape to fighter a great fighter like that... how are you going to do that yourself? Come on man," Arreola said.

Arreola knows was up. He is now picking Deontay over Joshua. In addition, when the two fought, the irony is Wilder treated that bout like a sparring session as he was obviously holding back on Chris because Deontay wasn't even…

Of course he will even casual fans know that, the only ones who think aj would beat wilder are so called boxing fans from the UK. We all remember how much fate they had in hatton before mayweather schooled him…

[QUOTE=Iamsmoke89;18890812]U obviously haven’t been keeping up with what’s going on with the fight[/QUOTE] You obviously haven't read this thread through to its conclusion

Wilder is hittable and can be outboxed. It seems 50/50. yes, i could see a windmill attack koing joshua early

[QUOTE=famicommander;18890510]He came into the fight much lighter than he usually is, he beat the best opponent of his career, and he weathered a storm of big bombs to come back and get the KO. Ortiz is easily the third best…