LOS ANGELES — Arnold Barboza Jr. wore purple and gold trunks that resembled the uniforms of the “Showtime” Lakers from the 1980s.

Just like those great teams did down the road in Inglewood, Barboza put on a show Friday at Staples Center by delivering a vicious third-round knockout against Mike Alvarado on the Vasiliy Lomachenko-Anthony Crolla undercard.

Barboza, who grew up at nearby South El Monte, had the crowd roaring after his two-punch combo floored Alvarado, the former junior welterweight champion. 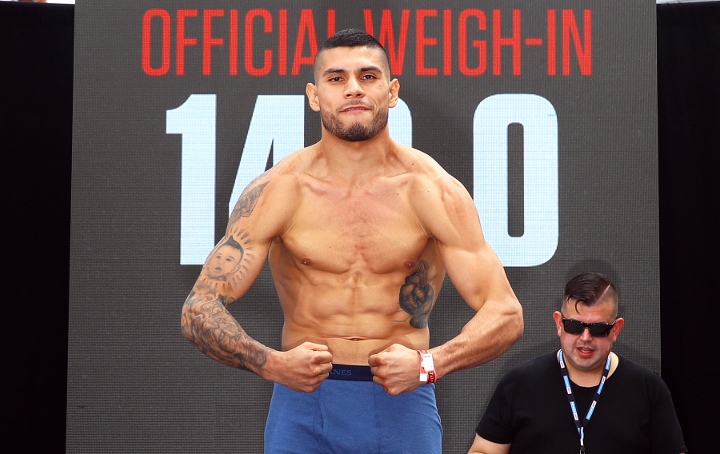 From the get go, it was clear Barboza had the hand speed advantage by landing vicious combos that started at the body and ended with uppercuts. A slow-footed Alvarado struggled to keep up.

“That was a good fight, and now I want Jose Ramirez,” Barboza said. “I want Maurice Hooker. That’s what I want in my future. Alvarado is a tough guy, and I stopped him in three rounds. Hopefully, this performance will catapult me to a world title opportunity.

“To perform like I did in front of my hometown fans, it doesn’t get better than that.”

After the fight, Barboza went to console Alvarado. The two are close friends and former sparring partners. Barboza, 27, helped Alvarado train for the Ruslan Provodnikov fight in 2013.

Six years later, Barboza has drastically improved and Alvarado could soon be on the way out. This marks the fourth time the 38-year-old Alvarado has been knocked out.

“He caught me with a clean, surprising shot," Alvarado said. "He just caught me. It’s boxing. Some just sneak in and do the job, you know?”

Entering the bout, Alvarado said he would be content regardless of the outcome. Alvarado overcame alcohol addiction and other personal demons to resurrect his career.

“I’m happy where I’m at,” Alvarado said earlier this week.  “My passion, my love for the sport is what keeps me going.”

[QUOTE=Santa_;19654148]Drained Mile High knocks him out at 147.[/QUOTE] His last two fights were at 142. He wanted to fight at junior welter. At welterweight some of those guys would have killed him.

[QUOTE=Santa_;19654198]Yup, he hasn't done that 6 years. It was Oscar-Pac all over again.[/QUOTE] That's fuccing bullshet! IDK why Mike agreed to that but that old punk motherfuccer Arum is a piece of shet! If he really wants to test his…

[QUOTE=BigStomps;19654194]I started watching the fight at the beginning of the second round and it surprised me how easy Barboza was tagging Alvarado.. But did this fight take place at the Jr welterweight level?[B] Did they really make Mike drain all…

[QUOTE=Santa_;19654148]Drained Mile High knocks him out at 147.[/QUOTE] I started watching the fight at the beginning of the second round and it surprised me how easy Barboza was tagging Alvarado.. But did this fight take place at the Jr welterweight…