Promotional banner Matchroom Boxing and sports streaming platform DAZN are in active and ongoing negotiations with Brown and Paul to stage a fight between the two stars in April, according to a source aware of the discussions.

Brown and Paul have been beefing over the last week on social media ever since Brown tweeted “Square up Logan Paul” and Paul fired back by saying “I’d drop you faster than the Patriots.”

On Tuesday, the former Steelers star posted since-deleted footage on social media of a recent training session hitting mitts in the ring at the Punch Elite Fitness gym in Miami. 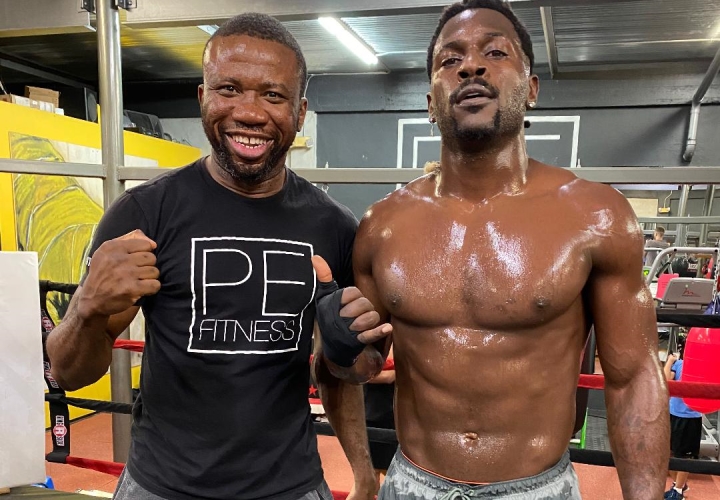 The man holding the mitts is Brown’s newly hired trainer in former two-time Nigerian Olympian and professional boxer Eromosele Albert, who amassed a record of 24-6-1 and 12 KOs before retiring in 2011 as a middleweight.

“Antonio Brown just started boxing and we just started training together. Yes, he is serious about the fight,” Albert said in an interview with BoxingScene.com. “We’re starting a training camp now. He’s a natural. He’s an athlete. It’s not a big transition. He’s going to catch up really quick. He needs a lot of work to get done, to correct all of his mistakes. We have three months to get ready for the fight. That’s enough time. He’s in shape already. We just have to work on his technique, head movement and defense — and that should be it for him to be ready.”

Online sports betting information platform Odds Shark listed Paul as a -2000 favorite, and Brown as a +1000 underdog immediately after the feud started.

“Antonio Brown is in a position where he can definitely use this fight,” Paul told a handful of huddled reporters in Los Angeles last week during a press event announcing his brother Jake Paul’s pro boxing debut later this month on DAZN against YouTuber AnEsonGib.

“A.B. and I are having some minor head butts. It could turn into something very real, but right now I think we can put on the best f------ show of 2020 … I may be delusional and optimistic, but the crossover between the massive digital audience and the mainstream audience A.B. brings would be f------ insane … He’s one of the best f------ athletes in the world. His ability to pick up a new sport like boxing, I’d imagine it would be pretty quick. For sure he would be ready to go with three months of training.”

Brown is a football free agent after the Patriots released the All-Pro pass catcher shortly after he was accused of sexual assault and rape in a federal lawsuit. It capped off a tumultuous year in which he was traded from the Steelers to the Raiders in April, and then released from the Raiders in September for clashing with the team’s front office.

“I know he's a hard worker, and I know he's good. He just has to be about it,” said former heavyweight champion Evander Holyfield on Wednesday from Punch Elite Fitness in a video message posted on Brown’s Instagram page.

Paul made his pro boxing debut in November on DAZN in a decision loss to KSI at the Staples Center in Los Angeles.

“We’re numbers people in this game,” Hearn told BoxingScene.com in an interview in November. “Everyone is. Anything that delivers is good news for everybody … If it’s thrilling, if it’s exciting, you’re going to see many more of these, and it won’t just come from me.

For the time being, Brown is training with Albert, who has also trained Jake Paul in the past in Miami.

In addition to a pro career, Albert had 500 amateur fights and was the Nigeria’s international team captain for 10 years, highlighted by appearances at the 1996 and 2000 Olympics. He’s since transitioned into a career in coaching at the Florida-based gym where he focuses on athletes who want to pick up the sport as a form of training instead of actual boxers.

“It’s just too much work training fighters, and being away travelling. I’d rather train athletes that are just ready to go,” said Albert. “I train a lot of football players and basketball players — they all come here for training. A lot of athletes box anyways.”

[QUOTE=Jack Rivers;20329218]This clown is straight up scum. [B]He's one of the biggest pieces of **** in the world[/B]. Those who don't know will eventually know and those who already know... Know [U]it's just a matter of time before this nig…

[QUOTE=Jack Rivers;20329218]This clown is straight up scum. He's one of the biggest pieces of **** in the world. Those who don't know will eventually know and those who already know... Know it's just a matter of time before this nig…

I remember when celebrity boxing matches were fun exhibitions between two washed up has-beens that only attracted a fringe audience. Now they have become bigger venues and generating a lot of revenue. I really don't mind if it means they…

Antonio Brown looked terrible on the mitts and bag. He could be in for a world of hurt.

Antonio Brown showed up to training camp in better shape than Andy Ruiz.