Anthony Joshua - What Happens If It Happens Again?

If he never won another fight, Anthony Joshua (22-1, 21 KO) would be able to say he had a career most fighters could only dream of.

In 2012, he won Olympic gold at super heavyweight at home in the UK. In his first 22 professional fights, he won three major heavyweight belts and a fight of the year, got rich, and became a ticket seller the rival of Jack Dempsey and Joe Louis. Quality wins over Dillian Whyte, Wladimir Klitschko, Alexander Povetkin, and Joseph Parker (the lone man to defeat Andy Ruiz to date) gave substance to his numbers.

At only 30 years of age, Anthony Joshua could never win another fight and be the envy of almost anyone who ever laced up a pair of gloves.

That’s the long perspective. It’s the perspective needed when a fighter whose ceiling seemed limitless crashes to Earth far sooner than expected.

In the short term, never winning another fight isn’t as concerning as not winning this Saturday. A loss this Saturday would be an even greater disaster than his first. The fighter who appeared on the verge of becoming the money heir to Floyd Mayweather would be a rebuilding project overnight.

As the Nationwide Insurance slogan says, life comes at you fast.

Joshua, poised to take his act global in June at the Mecca of boxing, Madison Square Garden, instead suffered four knockdowns before being stopped in round seven. Andy Ruiz (33-1, 22 KO), a late replacement and fringe contender at best coming into the bout, left with Joshua’s three belts, his zero, and his mystique.

Now they’ll do it again in Saudi Arabia (DAZN, 3 PM EST) for the WBA, IBF, and WBO belts. Joshua, the oddsmakers favorite to win the first time, assumes the same role for the sequel. A lot of smart money, and smart picks, disagree. Why wouldn’t they?

They already saw once, with their own eyes, what happens when Joshua connects on Ruiz and they saw the alternative. Both men got off the deck. One of them got up and won. 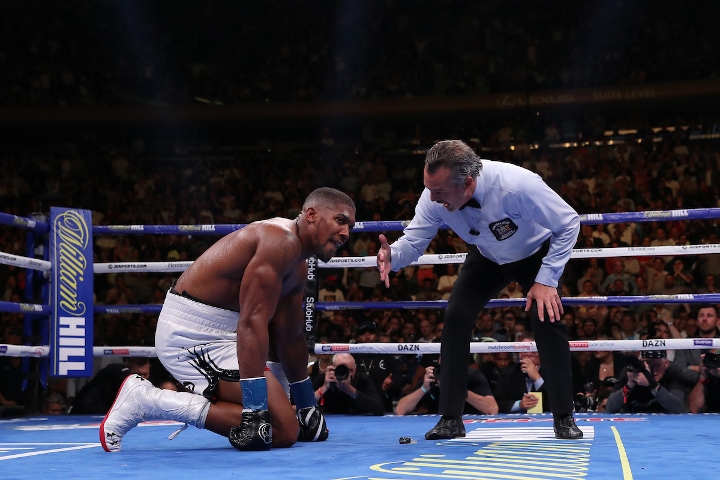 The chance is there to right the ship and return the heavyweight division to the status quo 2019 began with. Joshua’s stock would likely rise back home and he’d find open doors for another chance to crack the US market. His vulnerability might even help his marketing stateside.

If one was drawing up a perfect looking heavyweight specimen, Joshua would fit the bill. Tall, muscled, handsome, power punching...but now proven capable of being defeated? The memory of a single loss to Ruiz will always be enough to add drama to the proceedings. A fight with Deontay Wilder was huge before Ruiz. Wilder’s increasing ability to harness his power on more precise terms only increases the elements of danger.

Fury and Joshua is, was, and probably inevitably will be a stadium fight someday no matter what happens this weekend.

But if it happens again, if Ruiz retains, the future is a different place.

The business of Joshua will remain big even in defeat. He’ll still be able to sell tickets in the UK and, matched right, be able to build a redemption story. Those are never hard sells.

It just won’t follow the the product intentions the business of Joshua seemed headed toward.

The business of the heavyweight division in general would shift hard. Ruiz might jump to the head of the line for Fighter of the Year honors. The three-way center of gravity in the heavyweight division, Joshua/Matchroom/DAZN, Fury/Top Rank/ ESPN+, and Wilder/PBC/Showtime/Fox becomes a bi-polar world for the time being. Fury-Wilder II is coming next year.

If Fury wins, it stays a two-lane road. If Wilder wins the rematch, the PBC controls the lineage of the crown and the major titles. Speculation abounds that Ruiz would give up the WBO belt if he wins Saturday. He might. It would render the WBO heavyweight belt to the position it held when fighters like Ray Mercer, Tommy Morrison, and Francesco Damiani were battling for it against not-Evander Holyfield, Riddick Bowe, or Mike Tyson.

A Ruiz win this weekend, and a Wilder win over Fury, sets the stage for the PBC to assume control of the immediate future of the heavyweight division with an all-American unification bout to promote sometime in 2020. Even if Wilder loses to Fury next, some reports have them contracted for a third fight down the road.

It leaves everyone with a toe in the mix that matters...except Joshua. If it happens again this weekend, Joshua is likely out of the real title scene until at least 2021 and, to get back into it, he’d be without a big piece of the negotiating leverage he’s had for the last few years.

Joshua needs a win this weekend. He needs it as bad as any superstar fighter in recent memory. An enviable career in the rearview mirror isn’t what he’s been in the gym for since the first Ruiz fight.

Need isn’t the same as achievement.

At some point on Saturday, Ruiz is going to land. How Joshua responds physically, if his legs go rubber, and mentally when the question of ‘is this happening again’ rolls through his mind, will determine both his fate and a big part of the future of the heavyweight division.

[QUOTE=The Boston Hera;20232246]Like I said... drugs ARE bad. You memory has become ego imagination. Hearn threw up every road block he could. From an 80 to 20 split (for 2 undefeated, unquestionable champions) which is basically a **** off deal,…

[QUOTE=Ajvar;20234457]I don't exactly remember Wilder calling out Klitschko. Did he? Before after Fury or even Joshua fight?[/QUOTE] After becoming WBC champion: [url]https://m.lasvegassun.com/news/2015/jan/18/new-wbc-champion-deontay-wilder-unify-klitschko-wl[/url] Just before Fury fight: [url]https://www.forbes.com/sites/joshkatzowitz/2015/11/10/deontay-wilder-i-could-beat-wladimir-klitschko-tomorrow/#10ce78be1fea[/url]

[QUOTE=davefromvancouv;20233660]Klitschko preferred to fight Stiverne for the WBC belt. When Wilder refused to step aside, he fought Jennings and Fury instead. Even when Fury opted out of the rematch, he stayed retired for another year until Joshua came on the…

[QUOTE=Ajvar;20232577]Oh, OK, my bad for not understanding you, you made it sound like Wlad lost to Peter and that's why he ducked Wilder to not loose again. Because being a heavyweight, why would someone duck being afraid of knockdowns: that's…

[QUOTE=OnlytheTruth;20232588]Yes, all very valid reasons, I'll give you that. None of them, however, point to his inability to get back into contention for a World Title and then becoming Undisputed. That's what the real HW title is now, not a…