The mega match between Andy Ruiz and Anthony Joshua is hours away from unfolding.

The British-born boxer is direly looking to avenge his loss, and he does not plan on letting the fight reach a decision.

Joshua, who will weigh 50 pounds less than Ruiz once they step into the ring, doesn’t have plans of keeping the undersized-in-height heavyweight champion at bay to prevent history from repeating itself with yet another loss.

“No way. I’m here for knockouts,” Joshua told BoxingScene.com. “That’s what we do. I’m going to back him down, make him tired and chop at him like a tree ... I just have to what I need to do …. I’ve just been working on myself, really. I can’t rush. It’s a 12-round marathon, not a sprint.” 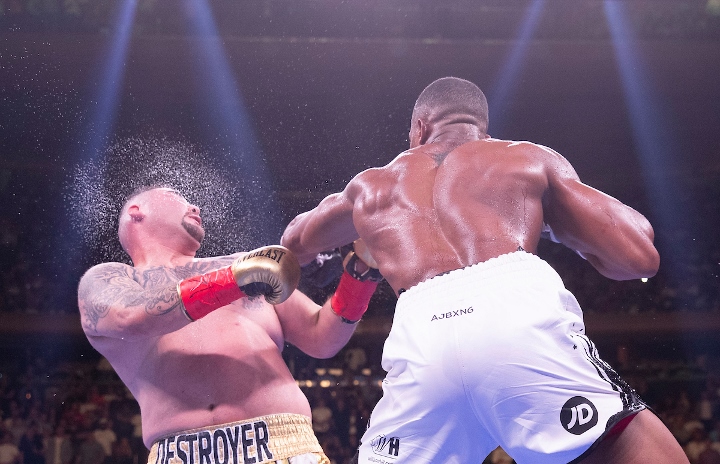 Joshua said he will throw more punches to fend off the fighter who knocked him down four times in June before the fight was finally called off in the seventh.

“The textbook stuff, you know. Jab, one-two,” said Joshua. “His hand speed did not give me problems … I know I’m better than him, really. I’ve been training in an arena full of greatness in my training camp.”

If the broken Joshua gets into a slugfest with Ruiz, he could get into trouble, much like he did in the first fight.

But Joshua’s power cannot be underestimated either. After all, he was having a good showing in the first two rounds before dropping Ruiz in the third. Seconds later, Ruiz rose from the canvas and landed the first crippling shot of the night that served to be the beginning of the end toward Joshua’s eventual demise.

A knockout win would give Joshua the definitive, mentally-repairing win that he needs, but the decision just might end up being the safer route to plant himself back into the heavyweight picture.

He looked scared to go for the KO. And fought to win by decision.

[QUOTE=ikigai;20239340]You are so ****ing stupid. Talking about people making excuses when you've been crying nonstop about aj for the last 6 months with the gayest excuses I have ever heard.[/QUOTE] You admitted to being dumb already. Your prediction shows you…

[QUOTE=Robbie Barrett;20239301]That's what happened. You couldn't see it. Which is why you made such a stupid prediction. :dunce: :rofl:[/QUOTE] You are so ****ing stupid. Talking about people making excuses when you've been crying nonstop about aj for the last 6…