Anthony Dirrell Might Retire Even If He Beats Benavidez

LOS ANGELES – Even if Anthony Dirrell defeats David Benavidez on Saturday night, this might be his last fight.

Beating Benavidez would solidify Dirrell’s place atop the super middleweight division and set up another seven-figure payday. It still wouldn’t necessarily guarantee that he’d continue to box.

Dirrell told a group of reporters this week that he and his wife, Shondrika, will have a serious conversation about retirement “win, lose or draw” versus Benavidez.

“I don’t know,” Dirrell said regarding retirement. “Fight by fight. You know, I asked my wife that before, not being selfish to her, because it’s her decision as well as mine, because she sees what’s going on in the ring. And I asked her about retirement. She just said, ‘We’ll see after your next fight,’ which means this fight. I mean, after the fight we’ll just assess everything. If she feels I should stop, then I’ll stop – win, lose or draw. And if she doesn’t, then I’ll keep going.” 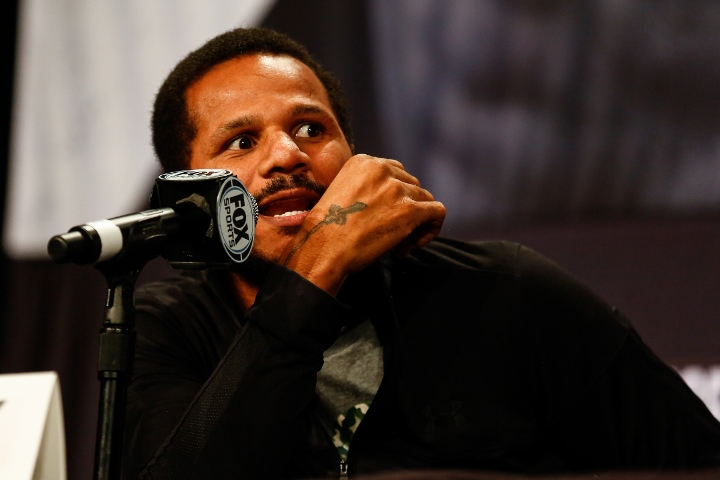 Dirrell, a cancer survivor who’ll turn 35 on October 14, is a big underdog against Benavidez, even though he is the defending WBC champion in their 12-round, 168-pound title fight on the Errol Spence Jr.-Shawn Porter undercard at Staples Center.

Benavidez (21-0, 18 KOs) is 12 years younger than Dirrell (33-1-1, 24 KOs), who won the WBC title for a second time in his last fight. The WBC stripped that championship from Benavidez for testing positive for cocaine a year ago.

For Dirrell, the thought of retirement is appealing because it’d allow him to spend much more time with his three sons, ages 7 and 3 (twins).

“When you’ve got kids, man, you miss ‘em,” said Dirrell, who overcame non-Hodgkin’s lymphoma in 2008. “When I was in camp last time, my son had his first basketball game and I couldn’t be there. I feel like a horrible parent, but I know if it wasn’t for what I did, then he wouldn’t be in the position that he’s in. So, everything started playing a part and I said I was just done. I wanna spend time with my family. My money, I’m straight. I’m invested in a lot of stuff and I’ll be good if I retire today.”

Dirrell became a two-time WBC 168-pound champion by beating Turkey’s Avni Yildirim by technical decision in his last fight. An accidental head-butt in the ninth round caused a cut over Dirrell’s left eye that led to their 12-round fight getting stopped in the 10th round February 23 at The Armory in Minneapolis.

His title defense against Benavidez will be part of FOX Sports Pay-Per-View’s four-fight telecast. The show will begin at 9 p.m. ET/6 p.m. PT and costs $74.95 to view in HD.

[QUOTE=BobLoblaw;20087019]That's not great to hear before a fight. Anyway, Dirrell won't see round 7. The Towel will be thrown in by then.[/QUOTE] I swear I didn't see your post before I posted lol :)

Dirrell looked bad imo vs Yildrim...if Benevidez is what most think he is, he should take Dirrell out fairly early imo...within six is my guess...Porter-Spence goes the distance in a fairly one-sided win for Spence

That's not great to hear before a fight. Anyway, Dirrell won't see round 7. The Towel will be thrown in by then.

Prediction some weird kermit cintron out of the ring ending or some ****.

one million dollars to lay down like a dog