Anthony Crolla Vows Not To Get Emotional In Final Career Fight

Anthony Crolla wasn’t exactly sure where his boxing career would take him when he turned pro 13 years ago.

What he knew in the end, though, was that it needed to come full circle.

The former lightweight titlist gets that wish granted, as he’s vowed to call it a career following a Nov. 2 showcase at the Manchester Arena in his hometown of Manchester, England.

“If you stay in boxing too long, it takes more from you than you take from boxing.” 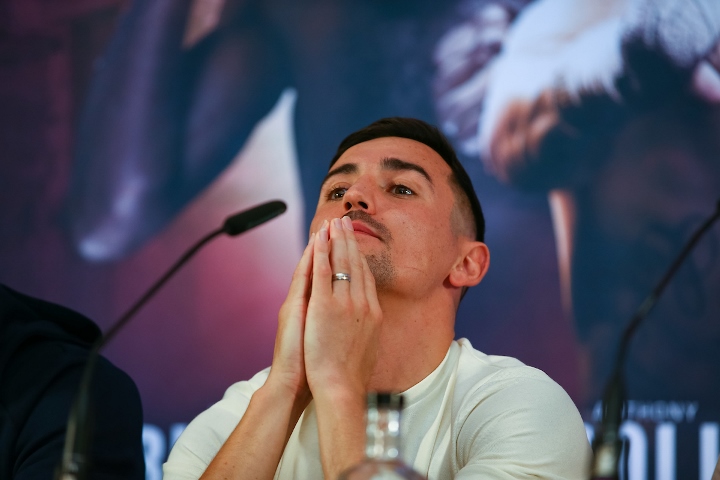 His placement on the show will come in supporting capacity to Ireland’s Katie Taylor’s bid to become a two-division titlist as the 2012 Olympic Gold medalist and reigning unbeaten, undisputed lightweight champion moves up to face Greece’s Christian Linardatou (12-1, 6KOs) for the latter’s 140-pound title.

An opponent has yet to be named for what will mark Crolla’s 14th appearance at the venue, a run which began with his Oct. 2006 pro debut. Just over 13 years later will come his attempt to claim his 10th win at home,

“Nov. 2, back where it started at the arena that’s made so many special memories for me,” noted Crolla, who claimed a lightweight title here in a 5th round knockout of Darleys Perez in their Nov. 2015 rematch, four months after fighting to a controversial draw in the same venue.

The pair of title fights marked Crolla’s triumphant return to the sport after suffering near-fatal injuries in an attempt to thwart a robbery attempt by two burglars in Dec. 2014. A blow to the skull from a slab of concrete cost him a title Jan. 2015 title shot versus Richar Abril but he’s more than made up for it since then.

His bouts with Perez kicked off a stretch of seven home appearances in an eight-fight span, including a pair of losses to Jorge Linares—his only two home defeats—to end his title reign along with a competitive but clear points win over former three-division titlist Ricky Burns in Oct. 2017.

His last appearance at Manchester Arena—a 12-round nod over Daud Yordan last November—put him in line for one final title shot. It came against arguably the very best pound-for-pound boxer in the world today, as Ukraine’s Vasiliy Lomachenko manhandled the always classy Crolla in four rounds this past April in Los Angeles, Calif.

Armed with a terrific training camp going in, the 32-year old Brit knew he left no stone unturned and at that moment was already pondering his exit strategy from the sport.

“Boxing’s been good to me, took me to so many special places,” admits Crolla. “I’ll always be thankful for that. But you can’t stay in it for too long.

“On the night (of the fight), you can’t get emotional. I’ve got to go out there and do my job. I’m there to a do a job on Nov. 2. I’m going to miss these nights but am very thankful for the memories I have.”

Good luck to the boy, I hope he's right and he has taken more from boxing than boxing has taken from him .. good luck son ..

Crolla is a gentleman. He beat some decent fighters and never once said a bad word about any of them. Great professional and always in shape.

I have a lot of respect for Crolla. With hard work and persistence he achieved more than we all expected and improved so much in the late stages of his career. Wish him all the best in his retirement.

will be a nice easy opponent that he can look good against and ride off into the sunset. Fair enough.

He will fight a journeyman with 22 loses and does not come to win. Money for nothing:damnit::owned::boxing:

ADD COMMENT VIEW COMMENTS (5)
Advertisement
Top Headlines Memo Heredia Has High Hopes For Robeisy Ramirez Bob Arum: We Think Ajagba Can Be Among Top Heavyweights In The World Ennis: Extra Weight Won’t Matter For Abreu; I'll Go In There & Get The Stoppage Pedraza: As I Keep Moving Forward, Fights Will Keep Getting Tougher And Tougher Alex Saucedo vs. Arnold Barboza Jr. To Co-Headline Lomachenko-Lopez On 10/17 Erickson Lubin: You Could See How Much I've Changed Since The Charlo Fight Jaron Ennis: I Might Have To Get Into A Mandatory Position To Get A Title Shot Ajagba: Time Away From Ring Was Frustrating, Hurts To Not Be Able To Do Something You Love Nyambayar: I Had A Sprained Ankle Against Gary Russell; I'd Love A Rematch Lubin: I'm Fresher, Hungrier Than Lara & Trout; Looking To Make Statement Against Gausha Pedraza: I Think Lomachenko Will Dominate Lopez, But He Can't Get Reckless Daily Bread Mailbag: Charlo Brothers, Ennis, Canelo, Spinks, More BoxingScene.com's Television Pick of The Week - September 19 McKenna: Beating Ohara Davies Will Be Highlight of My Career Joe Joyce: We'll See if Dubois Can Take My Heavy, Powerful Shots! Frank Warren: Whyte Received Shorter Medical Suspension Than Spelman? Francis Chua Aims To Fight, Looks To Kambosos, NG, MacKenzie Boxing Facing Financial Adjustments Johnny Nelson Confident Whyte Would Have Benefited With Tibbs in Corner Vijender Singh Hopes To Resume Career Before Year is Over Josh Taylor Must Remain Focused on Khongsong, Says Ben Davison Javier Molina: Pedraza Looked Good With LesPierre - I'm No LesPierre! Amir Khan Appointed as President of WBC Middle East Boxing Council Ajagba vs. Rice, Ramirez vs. Caraballo - Ready To Fight Jose Pedraza, Javier Molina - Set For Showdown in Las Vegas Pedraza-Molina ESPN+ Weigh-In Report From The Bubble Ennis vs. Abreu, Nyambayar vs. Breedy - Set For Bouts Erickson Lubin, Terrell Gausha - Ready For WBC Eliminator Haven Brady Jr. Inks Promotional With Top Rank Crawford vs. Brook Negotiations at Advanced Stage For November 14 Zhang Zhilei Inks Promotional Pact With Eddie Hearn Juan Carlos Abreu Comes In 3-Plus Pounds Overweight For Jaron Ennis Fight Rene Tellez-Giron Return Pushed Back Due To COVID-19 Terrell Gausha: I Was Nervous That I Wouldn't Get This Fight Again Teofimo Lopez: Lomachenko Is On His Way Out, I'm Looking Through Him Jermell Charlo: I Don't Want Judges To Make Decision For Me Against Rosario Hearn on Yarde-Buatsi: It's a Massive Box Office Fight at The O2 Abreu: Either Jaron Ennis Knocks Me Out Or I Will Knock Him Out Bilal Fawaz Inks Agreement With MTK Global Lewis Ritson Vows To Fight His Way To a WBA Title Shot
Advertisement
Latest Boxing Videos 'The Journey - Charlo Doubleheader' 30 Minute Special Showtime Releases Trailer For Documentary 'Ringside' Charles Martin Reacts To Helenius Stopping Kownacki Robert Helenius Reacts To Shocking TKO of Kownacki Adam Kownacki Reacts To TKO Defeat To Helenius Joseph Parker Reflects on Fury-Wilder, Talks Return Mikey Garcia Reflects on Fury-Wilder, Talks Vargas Eddie Hearn Reflects on Fury Stopping Wilder, More Kenny Porter Reacts To Tyson Fury Stopping Wilder Jose Ramirez Reacts To Tyson Fury Stopping Wilder
Recent Top Stories Graveyard Shifts At Warehouse Motivated Molina To Turn Around Boxing Career Erickson Lubin vs. Terrell Gausha: The Play-In Derevyanchenko Vows: I'm Ready For Everything in Charlo Fight Remembering "The Showdown" – Still a Thrill After 39 Years
Advertisement
Latest Forum Threads
Advertisement
Advertisement
This website may contain adult language.
TM & © 2020 BoxingScene. All Rights Reserved.