It wasn’t quite the fairytale ending that Anthony Crolla had in mind. The former WBA lightweight champion managed to bag the victory in the final fight of his career, but the majority points decision he was handed over Frank Urquiaga looked generous in the extreme.

At 32, Crolla was three months older than Urquiaga, who was born in Peru and now calls Barcelona home. But Crolla boxed in the main like someone whose desire had already left him. He was caught out by Urquiaga’s fast start and, while he did better in the middle rounds, he never looked comfortable and was never able to impose himself.

Yet the wave of support that swept over Crolla this week also seemed to take in the three judges. Michael Alexander scored it a draw, 95-95, which could be filed under “fair enough” as several rounds were close. But it was difficult to see how Howard Foster came up with a score of 97-93 in favour of Crolla and Steve Gray’s 98-92 seemed crazy. 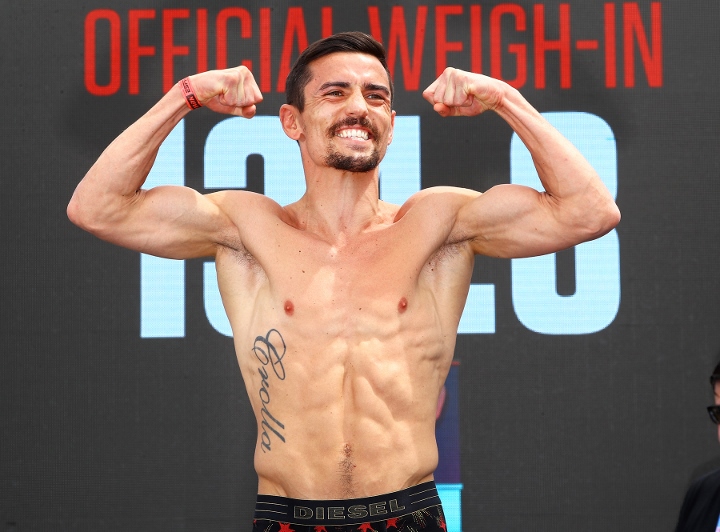 Unsurprisingly Urquiaga left the ring in disgust. The Spaniard still has ambitions in this game and the judges took away the biggest win of his career, one which could have been a springboard to bigger things

Crolla seemed a bit embarrassed by the controversy too. Honourable defeat, in the circumstances, would have stood for more than a dubious victory, especially as the prize was one as meaningless as the WBA “continental title”, one which was not even on the line for Crolla as he scaled over the limit at the weigh-in.

“I definitely thought I had done enough, but I know time is up now,” Crolla said. “I’ve had a great career and I’ve loved every minute, but I know it is time to go now.

“I tried my best to block it out, but I had a lot of nice messages today and that made me a bit emotional. I done the best I could and enjoyed the ringwalk, enjoyed the fight but I also knew that’s enough now, I’m past it. I don’t want to hang around to be a stepping stone for some of the fighters coming through. It’s great to go out with a win and there is nowhere else I would rather do it than Manchester.

“I set out in this game with two goals, one was to get a house, to make life a little bit easier for the family; the other was to win a world title. Thankfully I worked hard, Eddie (Hearn) provided me with the chance and I took it and I lived the dream.”

Crolla had to endure a difficult opening to the fight, as Urquiaga set a fierce pace and caught Crolla multiple times in the opening four rounds. While he did better from round five onwards, he never really managed to impose himself on Urquiaga.

Having got into the fight into the middle rounds, Crolla seemed to fade down the stretch and while Urquiaga looked tired too, it was Crolla who looked in need of the strong finish. The judges, though, had other ideas.

so crolla missed weight and lost the fight, but the juges gave him a goodbye gift. yuck.

Two judges were way off but I didn't mind anything between 6-4 either way. It was a close fight. After the first 4, the Spanish kids accuracy dropped off and he got a bit wild

It was a disgusting decision. And I’m British lol

I almost felt crazy when they read the scores. I’m glad I’m not.