Anselmo Moreno: A Postscript or A New Chapter

He wasn’t so much knocked out as surrendered into the finish.

It was a moment reminiscent of the end of Aaron Pryor-Alexis Arguello II or Manny Pacquiao-Erik Morales III. Anselmo Moreno (36-5-1, 12 KO) might physically have been able to beat the count when he was dropped for the fourth time last September in his rematch against Shinsuke Yamanaka. He wasn’t going to try. A hard shot to the head and he collapsed in the corner, landing almost in a sitting position.

He was pulling out his own mouthpiece, exhausted, as the ref waved the fight over. Moreno had given everything he had in one of the best fights of 2016. Nearly a decade near the top of the bantamweight division came down to a defining shootout with one of the few genuine peers he had during those years.

It was a glorious seven rounds, both men on the floor and leaving it all hanging out. It was more glorious for Yamanaka.

This Saturday, the now 31-year old Panamanian begins to find out what comes after his bantamweight years. Moreno isn’t new to Jr. featherweight. He lost a fantastic fight at 122 lbs. to Abner Mares in 2012, coming off the floor in round five to battle hard through the second half.

Then, he had a title to go back and defend, a weight class he could still call home. Now, he’s moving up presumably for good with nothing to fall back on. He will face former WBC 122 lb. titlist Julio Ceja (30-2, 27 KO) in a dangerous fight for both men.

Ceja is also coming off his own first stoppage loss. Last February, Ceja lost his title to the man he defeated to win it, Hugo Ruiz. After stopping Ruiz in five in an August 2015 shootout, Ceja was shockingly stopped in one round, in part due to a leg injury suffered on a knockdown. Still only 24, Ceja is younger, rested, and can crack. 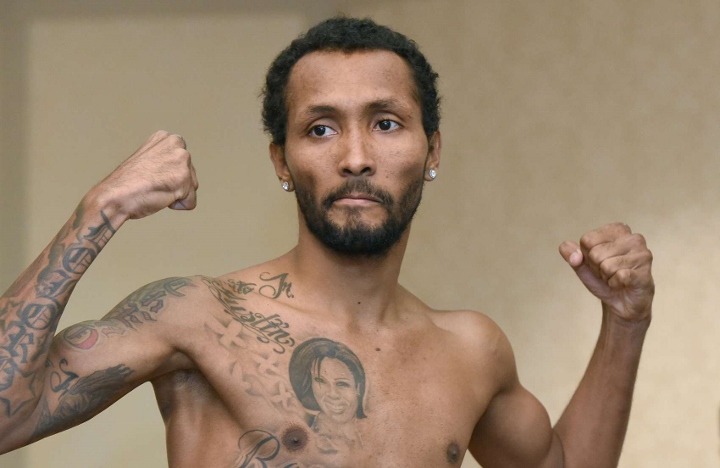 He can end Moreno’s time as a contender before it starts at Jr. featherweight.

This Saturday is an eliminator for a crack down the road at the WBC belt. The current titlist, Rey Vargas (29-0, 22 KO), waits on the other side. Can Moreno get to him?

Is this the postscript to what will go down as his most memorable night as an upper echelon prizefighter, or simply the start of a next, later, career chapter?

Moreno, at his best, evoked whispers of the style of Pernell Whitaker. Never as offensively talented as Whitaker, Moreno’s defense was where one could see some similarities. He could fight off the back foot but he was more impressive in the pocket. Slipping and parrying punches at close quarters; the best of Moreno would land from odd angles and nail the body with accuracy and authority.

He did a lot of his best work on the road, adding to his allure for the hardcore following that talked him up for several years. Moreno would end many a fight only narrowly, officially, ahead on the cards even as he appeared several rounds ahead. As a visitor, it meant he’d been so good even the locals couldn’t rob him. Even the Yamanaka rematch carried an air for some of Moreno being wronged in the decision the first time.

It’s not easy to be a stylist in divisions that demand blood for mass interest. Moreno went unbeaten for a decade, posted double-digit title defenses at bantamweight, and eventually got to show his skills to the world. His 2011 undressing of Vic Darchinyan, televised on Showtime in the US, was eye opening. Fans had seen Darchinyan stopped by Nonito Donaire and lose competitively to Joseph Agbeko and Mares. They’d never seen him embarrassed for almost every second of a fight.

Since Moreno’s loss to Mares, it has been a different trajectory. He’s 3-3 in his last six. While the first loss to Yamanaka had debate, and a loss to Juan Carlos Payano had the misfortune of an early cut ending, the numbers don’t leave wiggle room. He has to win here to keep his career vibrant.

It’s going to be hard. Not many fighters bounce right back from a loss like he had to Yamanaka last year. Erik Morales battled fiercely but lost to David Diaz in his first fight after Pacquiao III. Morales didn’t fight again for nearly three years after that. Arguello didn’t fight again for two years after Pryor. Both Morales and Arguello had encore moments that reminded everyone what made them special, Morales in defeat to Marcos Maidana and Arguello with a knockout of Billy Costello.

Neither stopped there and both ultimately still went out in defeat.

If Moreno has something similar in him after a fifteen-year career, a number more important than his calendar age, it will come in a different fashion. He certainly hasn’t been the sort of fighter Morales or Arguello was. For Moreno, a sound outboxing of a younger man will be his call back. One more title would be icing on the cake.

It is enough to deem it worth finding out what he has left. Moreno gets hit more now than he used to and is probably at the end of his rope. If he has a few more left in him, it would be a nice way to end his story.

Now competing in the same division with Cuba’s Guillermo Rigondeuax, a couple wins and it would be fun just to see the small, vocal cadre of folks who’d be interested in that IQ test with fists defend themselves against an angry Twitter horde questioning their sanity.

Does an aging, tricky southpaw have a few more tricks up his sleeve? Julio Ceja will find out Saturday.

If I woke up tmrw and every division below featherweight was abolished, I wouldn't even blink.

Hope I can find a stream of the Moreno/Ceja fight, should be a good one!

Chemito is not great he''s good ..maybe the weed helped them but vs Ceja he should win ...advantages in height and reach w/Cejas lazy jab, remember how Ruiz KO'D him ... I could even see a late stoppage for the…

I was completely shocked to see the current WBC 122 rankings, I thought Randy Cabellero was coming up next in line for Rey Vargas and now Moreno can slide in ahead? Randy is a former champ and has not lost!…

Panama has some great :boxing:champs and Chemito is one of them.