Super middleweight contender Alexis Angulo (26-1) was ready to fight David Benavidez (22-0) this spring when they were originally scheduled to battle.  The bout, like most of the sports world, was postponed in mid March because of the COVID-19 pandemic.

The Showtime main event has been rescheduled for Saturday night and Angulo believes that the extra time in the gym will be a benefit for him.

"I believe that the change in dates from April to this date helped me out. It helped me concentrate more on my training both in how I trained for this fight and it also helped me mentally and spiritually to prepare better. The date change was the best thing that happened to me," Angulo explained on a recent Zoom media conference call. 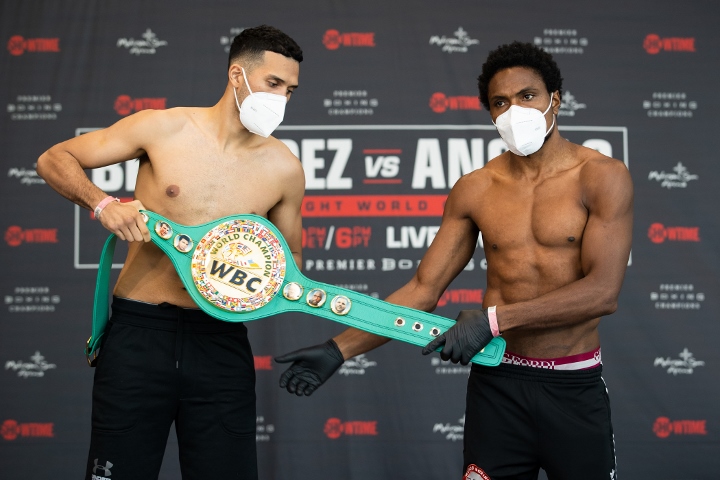 Benavidez's team has recently predicted that they will win the fight by stoppage in either the 6th or 7th round.  Angulo brushed off the trash talk and simply said that they will see what happens when they get in the ring.

"Team Benavidez is free to think what they want but only God knows what is going to happen on Saturday night. I plan on showing them something different," Angulo stated.

Boxing didn't resume in the United States until June and several fighters still haven't had their first fights of the year. While the COVID-19 pandemic has had a negative impact for most people, it has actually been a positive for Angulo.  The Colombian was one of the first foreign fighters to get into the country after the United States increased their border restrictions to help combat the coronavirus.

He hopes that turning the negative situation into a positive will result in an upset victory on Saturday night.

"I came here on a good date early on to help me focus on this fight. The pandemic has affected a lot of people negatively but for me it actually helped me by giving me more time to train and get ready for this fight and it will show on August 15th," said Angulo.

The WBC super middleweight title will only be at stake for Angulo, as Benavidez failed to make weight on Friday and lost the belt on the scale.

The Showtime tripleheader broadcast will be rounded out with Rolly Romero facing Jackson Marinez for the vacant interim WBA lightweight title and a heavyweight battle pitting Otto Wallin against Travis Kauffman.

Angulo is a road warrior with good power. But he's 36 years old and Benavidez much better with any department. David by TKO 7

Please Angulo, win this fight for my wallet.