Angulo: If I Could Change One Fight In Career, It Would Be Lara

At age 36 and with 15 years in the pro game, Alfredo Angulo is at the point in his career where he remains focused on one final run but also thinking about anything he could’ve done different prior to this point.

Few boxers are fortunate enough to leave the game without ever having tasting defeat, and even fewer among the rest who don’t envision having ever done things differently upon further review of any given night that didn’t go their way.

Angulo has losses on his record where he simply accepts for what they were—knockouts he did a poor job in preventing, decision defeats he felt were unjust or those bouts where he simply never gave himself a full chance to win due to less than stellar preparation. 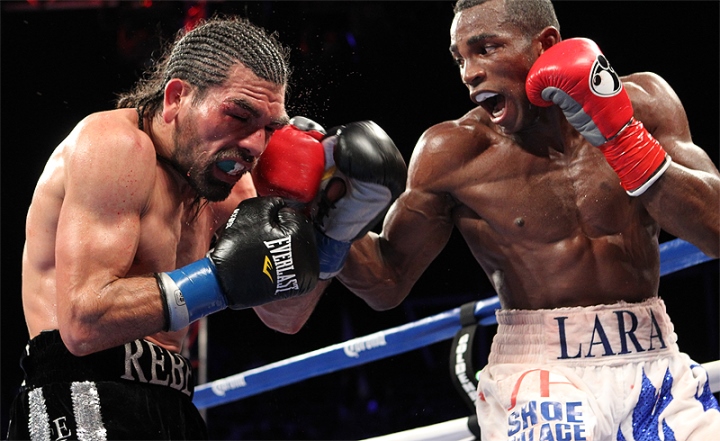 The prideful knockout artist now enters the twilight of his career hoping to at least end on a high note under the tutelage of famed trainer Abel Sanchez. His first step towards that goal begins Saturday, when he faces Evert Bravo on the FS1 portion of a Premier Boxing Champions (PBC) on Fox telecast live from Dignity Health Sports Park in Carson, Calif.

The venue formerly known as the StubHub Center has long been known for producing more than its share of Fight of the Year winners and contenders. For Angulo, it’s also provided the one fight in his career he always wished he could have back.

“If I could change one fight in my career, it would be the one with Erislandy Lara,” Angulo (24-7, 20KOs) told BoxingScene.com of his memorable June ’13 war with the Cuban southpaw, in which he suffered a 10th round stoppage loss. “I was in great shape and so close to winning that fight.

“It really would’ve changed my career.”

Angulo scored two knockdowns of the normally elusive Lara, who managed to storm back and eventually batter the California-based Mexican slugger into submission. Their fight was very much up for grabs on the scorecards when Angulo was unable to continue midway through round ten due to grotesque swelling around his left eye.

At the time, Angulo believed he was thumbed in the eye which in turn fractured an orbital bone. Replays didn’t quite align with that theory, as he was forced to live with the second stoppage defeat of his career—a memory he’s able to share with Lara as the two have since become close friends.

Instead of winning a title and perhaps entering a fight with Saul ‘Canelo’ Alvarez with far greater momentum than was the case in his March ’14 loss, it instead sparked a downward spiral. Angulo has lost five of his last seven starts, but most of the rest on nights where he felt like he could’ve given himself a better chance of winning.

On that particular night in a venue which habitually churns out instant classics, Angulo felt at his best in every which way except for the bitter ending. It hit home even harder a year ago when, on the same night he dropped a disputed decision to Sergio Mora, the main event saw Lara fall prey to an aggressive style similar to his own.

“A lot of people always thought it was the Canelo fight for me, but I wasn’t 100% and just fought on heart and balls alone that night,” Angulo admits. “The Lara fight was one where I really felt like I was at my best—and where I even provided the blueprint as you saw last year, when Jarrett Hurd beat him to unify the titles.

“It was bittersweet to watch (Hurd) do it, as I really like him as a fighter. At the same time, he beat a fighter I consider a friend, and did it the same way I was on my way to doing on a night when I felt like I was at my best.”

So he fights tonight on the Garcia vs Granados undercard?

He had a true Mexican style. Win or lose, he would fight like a macho man. As for Lara.....nobody watches hi fights, not even Cubans, as for Kirkland, Canelo retired him.

[QUOTE=SHO_RULEZ;19672165]Angulo got his whole career beaten out of him by James Kirkland.[/QUOTE] I have never seen anyone gas out as fast as Angulo did in that fight.

amazing how for so many fighters you struggle to find one real entertaining fight then you have salido, angulo, joselito lopez who delivered so many classic nights. even in fights you haven't seen. angulo should be done already. dude is…

Angulo got his whole career beaten out of him by James Kirkland.