Angel Garcia: 'I Don’t Want To Hear No Bullcrap' When Danny Beats Spence

Angel Garcia does not want to hear any excuses if – or as he prefers to put it, when – his son and trainee, Danny Garcia, defeats Errol Spence Jr. in their welterweight title fight on Dec. 5.

Spence, of Desoto, Texas, was involved in a heinous car crash last year that left him with severe, but not life-threatening, wounds to his face and body. Not surprisingly, the accident has lent a greater sense of intrigue to his upcoming Fox pay-per-view fight against Garcia at the AT&T Stadium in Arlington, Texas, his first in-ring appearance since the catastrophe. Spence will finally have an opportunity to answer dogged questions as to whether or not he has lost a step since his career-best victory over Shawn Porter last year, shortly before the crash. Spence unified the IBF and WBC welterweight belts as a result of that fight.

But as far as Angel is concerned, the fact that Spence (26-0, 21 KOs) is ready to fight at all renders all the speculation about his condition moot.

“At the end of the day I… can’t judge him (Spence),” Angel said on the Bridge Bizness podcast. “I know he’s supposed to be 100% when he comes. I just want the fans the people to understand that when Danny becomes champion Dec. 5, I don’t want to hear no bullcrap, no excuses. When Danny had bad decisions with (Keith) Thurman and (Shawn) Porter we didn’t cry the blues. I didn’t blame Danny. he didn’t blame me. We sucked it up. We still here. 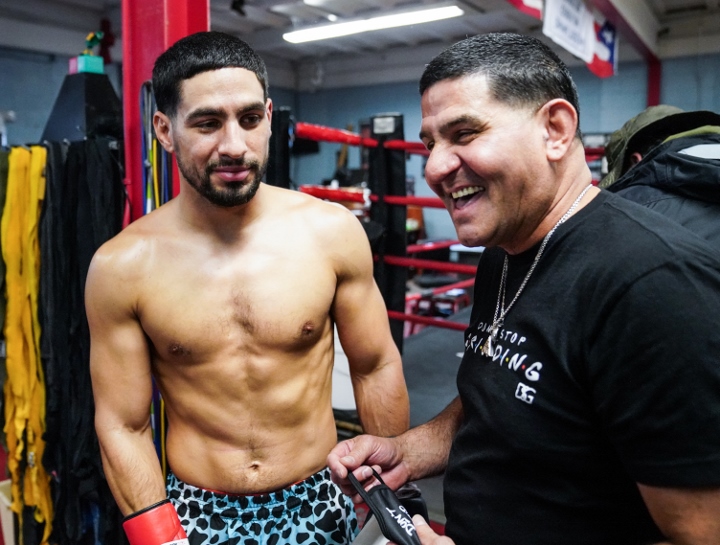 Far from downplaying the car crash, Angel believes that the fact that Spence is ready to fight after such a harrowing circumstance means that Spence must be in prime condition. Why else, then, Angel argues, would Spence’s doctors and handlers allow him to face someone as dangerous as his son?

“The medical doctors, I think they cleared him,” Angel said of Spence. “If you had a major accident like that, because – I don’t know if you looked at the video real good…he flies out of the car he comes straight down on his face. When the car flips over he comes right out flush on the ground. If a doctor clears you to fight like a guy like Danny…I don’t know what his trainer is thinking or what the doctor is thinking, so I gotta worry about Danny.”

“I just feel like I gotta be me, I just gotta be dominant," Danny said. “I think that was the difference in those two fights (against Thurman and Porter). I didn’t do that much extra, but they didn’t do it either. It was just that type of fight I thought I won, they thought they won. But I just feel all I gotta do is a little more, be a little more dominant and the fight is mine.”

If the winner won't fight Crawford, who cares?

[QUOTE=Gillie;20908655]Danny has an iron chin. I see it going the distance in foty type fight with Spence winning a split decision.[/QUOTE] Spence beats people to the body, first...