Andy Ruiz on Rematch: Not Everything is Correct in The Contract

IBF, IBO, WBA, WBO heavyweight champion Andy Ruiz is insisting that he's not going to travel over to Saudi Arabia to face Anthony Joshua in a rematch, which at the moment is scheduled for December 7.

Back on June 1 at Madison Square Garden in New York City, Ruiz dropped Joshua four times to stop him in the seventh round.

A few days after the loss, Joshua exercised his right for an immediate rematch. 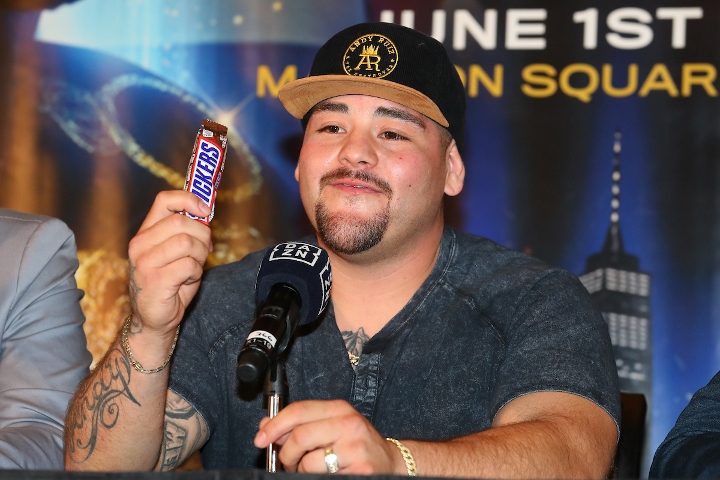 Last week, Joshua's promoter Eddie Hearn staged a press conference in London, where he officially announced the rematch was landing in Saudi Arabia on December 7.

Since that press conference, Ruiz has conducted several interviews where he countered Hearn's announcement. Ruiz wants the rematch to take place in the United States, preferably back in New York City.

"Several things have been said, they say something and we have another point of view. Not everything is correct in the contract, but there are also things that were stipulated as well. My team is already negotiating, my thing is to train and win again," Ruiz told EFE.

Prior to the first meeting, both Ruiz and Joshua signed on for a rematch clause. The terms of the clause were outlined in the initial agreement - and Joshua's side has the power to set the venue and location.

Hearn has already cautioned that a legal battle is possible - if Ruiz refuses to honor the contract terms of the rematch.

As far as the rematch itself, Ruiz will train with the mindset of avoiding any mistakes.

"At lightweight or middleweight it is easier to follow a certain tactic, there is a line of how to continue the fight. [At heavyweight] we are stronger and a single punch can end everything. The only sure thing [about the rematch] is that there will be action," Ruiz said.

Yeah wasnt he partying and eating sushi from naked babes just a while ago? This champ life ***** is getting to him already Fingers crossed he gets himself ready for the dessert in the desert

You literally said do anything of them have wins over Wilder (got a draw didn't even win on paper), Wlad (probably the most boring fight I've had the displeasure of watching live) and Chisora lmao so yes you held them…

[QUOTE=Kannabis Kid;20007506]You must be brain damaged I already gave you nothing but facts you said Wilder, Wlad, and Chisora when listing Tyson Furys greatest accomplishments so yeah you mentioned Chisora along with 2 world champions you can't embarrass me anymore…

[QUOTE=Sid-Knee;20001503]You better stop before I embarrass you any further. You can't back up anything you said. I've asked simple questions and you've given me nothing. Now you're trying to fob me off with more insanity by claiming I compared Chisora…

[QUOTE=factsarenice;19994116]My take is as stated, Al Haymon is using a weak minded Ruiz to shake loose the belts, no more, no less. The only value Andy has to Haymon is his ability to stall long enough to put the belts…