NEW YORK – Andy Ruiz Jr. has read a lot of the social media criticism about his weight while crisscrossing the world during a dizzying three-day, three-country press tour to promote his rematch against Anthony Joshua.

Critics have harshly condemned him since promotional photos and videos surfaced this week of a rotund Ruiz without a shirt. He appeared noticeably heavier than when he shockingly stopped Anthony Joshua three months ago.

The Snickers-loving heavyweight champion couldn’t help but laugh off the backlash Thursday. Ruiz believes too much has been made of how he looks three full months before he and Joshua will step in the ring again in Diriyah, Saudi Arabia.

He assured all the detractors that worry his weight will approach 300 pounds prior to their rematch that he won’t waste this opportunity to prove their first fight wasn’t a fluke. In fact, Ruiz told BoxingScene.com following the second of their three press conferences that he plans to be significantly lighter for their second fight than he was when he produced one of the biggest upsets in boxing history June 1 at Madison Square Garden.

Ruiz weighed in at 268 pounds the day before he stopped Joshua in the seventh round three months ago. That was disconcerting because the Imperial, California, native weighed 262 pounds for his five-round stoppage of Alexander Dimitrenko just six weeks earlier in Carson, California.

The new IBF/IBO/WBA/WBO heavyweight champion basically went right back into training camp after accepting the Joshua fight on five weeks’ notice and shouldn’t have had any time to gain weight. Ruiz obviously silenced skeptics who questioned his discipline by getting off the canvas from a third-round knockdown, dropping Joshua four times and beating the previously unbeaten Brit by seventh-round technical knockout.

Ruiz (33-1, 22 KOs) is intent to prove people wrong again by improving his conditioning for their immediate rematch and beating Joshua a second time. The 6-feet-2 Ruiz will weigh less for their second bout in part because he expects the 6-feet-6 Joshua to be noticeably lighter than the 247¾ pounds he was when they weighed in May 31 at Madison Square Garden.

“Anthony Joshua’s gonna be a lot lighter,” Ruiz said. “He’s gonna try to move a little bit more. But I don’t think that’s gonna be good for him. I’d rather him be a little bit more heavy, more strong. He has small legs, you know? So, it’s gonna be a little hard for him to be moving around, trying to box me around, with a faster guy. But anything could happen. It’s a 50-50 game December 7th. But the main thing is who has more confidence and who believes in himself more. I think that’s who’s gonna win the fight.” 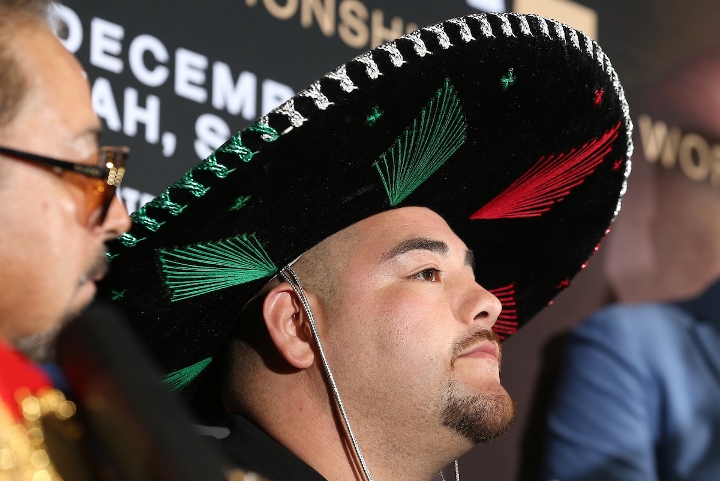 The 29-year-old Joshua (22-1, 21 KOs) didn’t specify how much he’ll weigh for their rematch during a lengthy interview with a group of reporters prior to the press conference Thursday.

“I’ve never really looked at my weight for fight night,” Joshua said. “It’s more of a feeling. How do I feel in sparring? That’s the ultimate preparation for a fight, so I’ve never really looked at, ‘I need to be this weight.’ But for Ruiz, I’ll only know how I feel when I get the right sparring in and I can tell my coach, ‘This is how I’m feeling.’ And then we’ll figure out the weight once the training adapts to it.”

England’s Joshua hasn’t read much into Ruiz appearing heavier over these past couple days. The former champion doesn’t view it as a sign that Ruiz isn’t taking their rematch as seriously as he took their first fight.

“Not necessarily,” Joshua said. “Ruiz is a big boy, anyway. And I see that the bigger they are, the harder they punch. He’s got a certain style that he just needs his feet planted to land a good shot, so the heavier he is, the better he is, I think. And I think this training camp will be based around [me], as I said, being fitter, being quicker. My training camp will be based around being better and being more slick.”

Ruiz clarified that he won’t come in lighter only because he expects the same from Joshua. He wants to feel different December 7 than he did June 1, even though the nearly 270-pound version of him completely changed the lives of him and his family.

Whatever he weighs December 6, Ruiz is certain that he’ll benefit from having a full training camp to prepare for a more focused Joshua. Joshua figures he, too, will be better prepared because he’ll have sparring partners lined up to replicate Ruiz throughout training camp.

“For the first time, I only had a month and a half, less than that,” Ruiz said. “So, we’ll have a better, proper training camp this time. So, we’re really confident we’re gonna win.”

Ruiz weighed in at 297½ and 292 pounds, respectively, for his first two professional fights 10 years ago. He assured anyone concerned he’ll balloon back up toward those weights for his rematch with Joshua that he’s heading into what will be a demanding training camp as soon as their hectic press junket concludes Friday in London.

“I’ve been flying,” Ruiz said. “I am a little bit bloated from the airplane and all that. You know what? Just the way that I look don’t mean nothing. What matters is being in the ring and ready to fight. That’s what really matters, not how I look right now.”