Andy Ruiz Honored in Mexico; Wants To Bring Rematch There

Andy Ruiz was asked by the DAZN broadcast team prior to his June 1 heavyweight title fight versus Anthony Joshua if he would visit the White House had he won the fight.

“I’ll be visiting the Mexican White House… if there is one,” Ruiz responded.

More than a week after his unforgettable upset win over Joshua, the newly crowned unified heavyweight titlist can confirm that such a place exists. 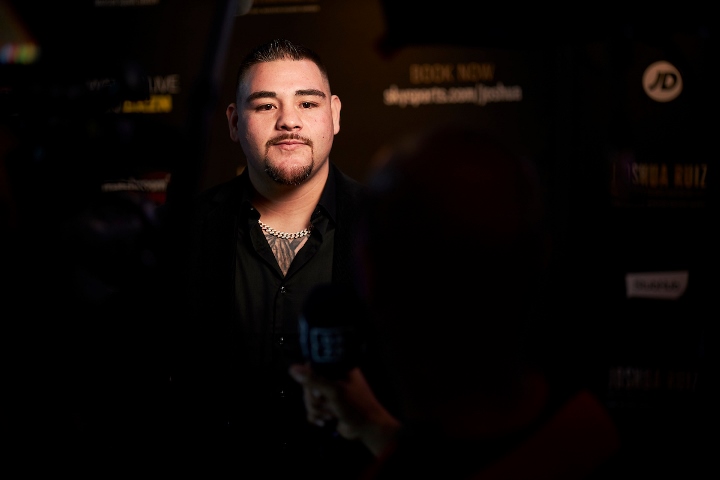 Ruiz was the guest of honor at Palacio Nacional, the federal executive located in the nation’s capital of Mexico City on Tuesday. The occasion commemorated his becoming the first-ever boxer of Mexican descent to capture the heavyweight title, which he accomplished in rising from the canvas to drop Joshua four times en route to a 7th round stoppage earlier this month at Madison Square Garden in New York City.

The memorable visit—accompanied by his father, trainer Manuel Robles, WBA President Gilberto Mendoza Jr. and the members of Mexico’s boxing commission—came complete with his meeting and posing for pictures with President Andrés Manuel López Obrador.

Along with taking in all the sites, Ruiz (33-1, 22KOs)—who lives in California but competed for Mexico’s national team throughout his amateur career—had time to discuss future plans. Obviously, his next fight will be a return go with Joshua (22-1, 21KOs), as the fallen Brit exercised an immediate rematch clause which came in their fight contract.

Locations for the event are still being discussed, with the likelihood of it taking place in either late November or early December. Joshua’s side will have final say on the destination, although the 2012 Olympic Gold medalist has suggested—through promoter Eddie Hearn—the possibility of returning to Madison Square Garden, which hosted a sold out crowd for the first fight which also served as his United States debut.

Early rumors had the rematch landing in Cardiff, Wales, where Joshua has twice before fought to crowds in excess of 70,000. Included among his run there was a March 2018 title unification win over previously unbeaten Joseph Parker, whom handed Ruiz his lone career loss in their Dec. 2016 vacant title fight in New Zealand.

Undoubtedly inspired by his visit and the history he’s already created for his culture, the new heavyweight king would certainly love to bring the fight south of the border.

The famed football (soccer) venue in capital city played host to a memorable Feb. 1993 event headlined by Julio Cesar Chavez Sr.–arguably the greatest to ever come out of Mexico—in a 5th round knockout of Greg Haugen to defend his super lightweight title. The triple-division champ—unbeaten and the reigning pound-for-pound king at the time—played to a record-breaking 132,247 in attendance.

There’s no telling how big of a crowd would turn up for Ruiz-Joshua II in such a venue, but at the very least would create history of a different kind.

“It would be a historic event,” Ruiz notes. “Azteca never hosted a heavyweight championship fight before.”

[QUOTE=Gideon lock;20191841]You are shot to bits if you think that's happening. Lay off the pints mate.[/QUOTE]lol we will see crack head.

[QUOTE=micky1971;19830397]Yes “gave him the chance” which he indeed took in good fashion. So, was he “chosen”? How do you say it then? There were many that were ready to go and many jumped at the possibility but, your man was…