Andy Ruiz is Going To Conquer Again - Don't Sleep on Him, Says Johnson

Back in June of 2019, Ruiz shocked the world when he dropped Anthony Joshua four times for a stoppage win in seven to capture the IBF, IBO, WBA, WBO world titles.

In the rematch, in December, Ruiz was in poor shape. Joshua was able to easily outbox him over twelve rounds to regain the heavyweight titles. 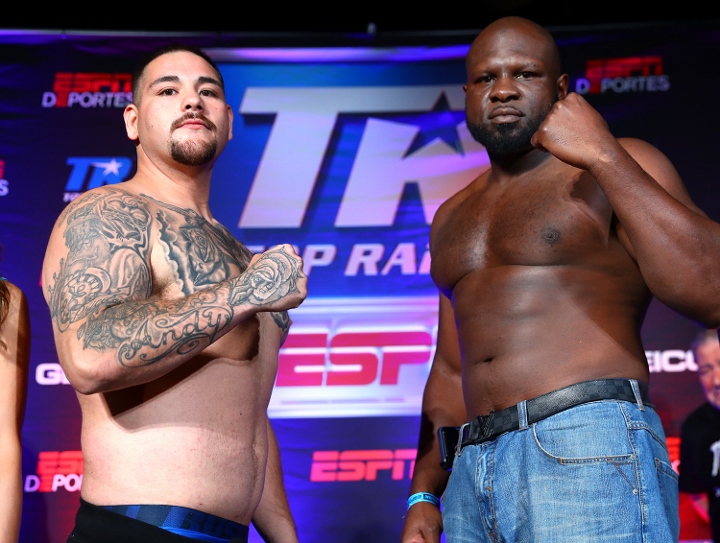 After taking that loss, Ruiz admitted that he partied for two months after beating Joshua. Because of that behavior, he started his training camp late and packed on the pounds.

Ruiz would end parting ways with trainer Manny Robles, and he recently hired Eddy Reynoso as his new coach.

Reynoso is best known for his work with Mexican superstar Canelo Alvarez. He promised to make Ruiz a far more dedicated fighter.

Johnson, 40-years-old, has a fought a who's who of opponents - including Vitali Klitschko, Joshua, Tyson Fury, Dereck Chisora and Kubrat Pulev.

While there are some who feel Ruiz is done as a top heavyweight - Johnson believes he will become a two-time world champion in the future.

"Andy Ruiz is going to conquer again in the division. You can't sleep on him," Johnson said to Stats Perform News.

"He made the same mistake I made after I fought Klitschko. You can't make all that money and then go and do whatever you want to do. You've got to stay focused. There was a rematch to come, he didn't stay focused and that's what happens. He got way more money than I got, so I can imagine!

"I know Andy, I know his pops. I love those guys. I've been out in LA with him one-on-one. He's one of the greatest fighters that you can ever sit down and talk to, you wouldn't even think he was a fighter. It will fool you. He has the greatest spirit of all fighters I know in the world.

"When I fought Ruiz the first four rounds were hell because I did what AJ did. You can't stand and trade with a guy who's a sniper. He's fast, very fast. Don't let the weight fool you. Under all of that fat is a great conditioned guy – great! And fast."

[QUOTE=Ray*;20593765]I don't think Ruiz would ever change or lose weight. Sometimes money can make you mentally weak, especially if you haven't seen money like that before. It takes a lot of discipline to get up every morning when you know…

Ruiz gave fata$$es world wide some hope. No that the fatsos have hope, Ruiz can go away and stay away.

I can't see Ruiz becoming relevant again. He has the skills but I think he lacks the discipline. I think he peaked when he snuck up on AJ. That won't happen again. Ruiz had his Buster Douglas moment

ruiz really knows how to put his fast hands to good use..... by stuffing his face with every piece of fast food in sight before anyone else can get any

Anyone read the ESPN article about Ruiz?