Andy Ruiz: Anthony Joshua Will Run and Try To Win Via Decision

Anthony Joshua uses high-intensity cycling to get in shape and is the owner of a FiftyOne custom carbon machine bicycle.

If you ask Andy Ruiz, he thinks the British boxer is going to get on his bicycle in the rematch Dec. 7 and be on the run instead of standing toe-to-toe in the middle of the ring to trade shots like they did the first time in June when Ruiz shocked the sports world and scored a seventh round finish.

“He’s going to try and win by points … especially since he’s going to be running around. My job is to cut the ring, and that’s exactly what we’ve been training for,” Ruiz said at a press conference at The Boxing Club East Village in San Diego. “I don’t really worry about what he’s doing, you know. We have to worry about what we’re doing. He has to train hard. I feel that he has more pressure than I do. I just have to do what I have to do, and just let my hands go and focus.” 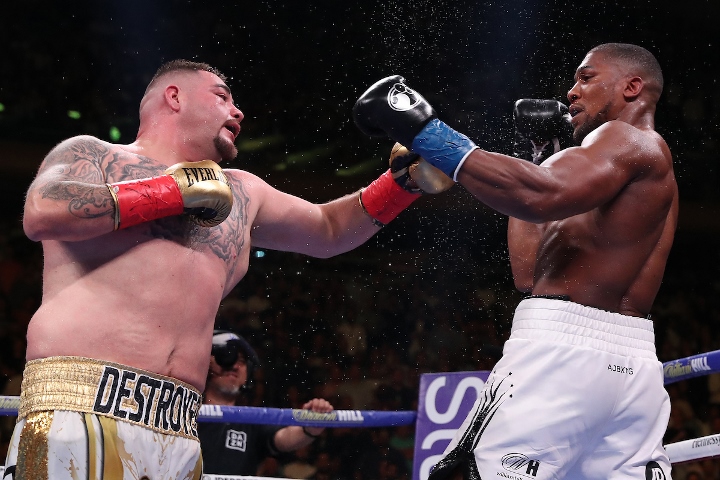 Ruiz has voiced his intentions of shedding excess weight off his figure in order to be in shape to chase Joshua should he need to in their Saudi Arabia showdown. He realizes that Joshua is doing much of the same too, based off of some of the images that have been shared across social media thus far.

“He looks a little slimmer, but I don’t think that’s going to do any different,” said Ruiz. “You can do whatever you want outside of the ring, but inside of the ring, when it’s fight time, like Mike Tyson said ‘everyone has a plan until you get hit.’”

Joshua was outpointing Ruiz and even dropped him in the third round earlier this year, but the tide immediately turned shortly thereafter, as Ruiz returned the favor seconds later with a knockdown of his own, and three more by round seven, the last stanza before the fight was called off.

Even though he was dropped and had to overcome some early adversity, Ruiz said he was pleased with his performance and will make the minor tweaks that will be needed in a battle between 30-year-olds.

“What we did in the first fight worked out, so maybe make a little adjustments,” said Ruiz. “We’ve seen the fight over a 100 times and saw the mistakes that I made, and he made, and those are the little things that we are practicing, trying to correct and make it better.”

Does AJ actually want to be heavyweight champion? Does he feel like he deserves it? A lot of past champions found they didn't want it. Liston, Spinks, Douglas, Tyson, Bowe - all those guys felt the burden wasn't worth it…

A robot on a bike?

[QUOTE=soul_survivor;20199510]yOU ARE INSECURE BECAUSE YOU BROUGHT UP A SUPPOSED EFFECT OF THE REFREE even though [B]the referee in the first Ruiz fight actually disadvantaged AJ[/B]. I will move on from it because I want to discuss boxing, not stupid American…

[QUOTE=BangEM;20135133]What is he supposed to do, fight a guy with short fast hands who doesn’t move feet with his long arms at close range and give him the advantage like he did the first time? This fat fu.cker is a…

[QUOTE=4truth;20197949]Insecure how?? How do your eyes interpret what you see when the referee is clearly breaking the fighters for no reason? I'm just saying what I see. Also, what fight have you seen since the Parker fight that convinces you…