Each man will enter the ring assuming an identity new to them.

For Andy Ruiz, for the first time he will enter the ring as “the reigning.” Half a year has passed since he shocked the boxing world with an off the deck, four-knockdown drubbing of Anthony Joshua. No matter what he does the rest of his career, Ruiz will always have that moment.

Will he have more? The possibility of a big money unification under the PBC umbrella with Deontay Wilder, the chance to continue to be a defending champion with all the cash and perks that come with it, only exist with a win Saturday (DAZN, 3 PM EST).

For Anthony Joshua, this will be the first ring walk since he found out what defeat tastes like. 2019 was supposed to be about taking his drawing power global. Marketing plans don’t win fights. After scoring a big third-round knockdown, Joshua went for the finish and set the stage for his downfall. He was beaten thoroughly, not quickly, and must prove to the world he can make the adjustments necessary to resume course.

This is who they are going into the rematch. Who will assume the identity of victor at the exit? 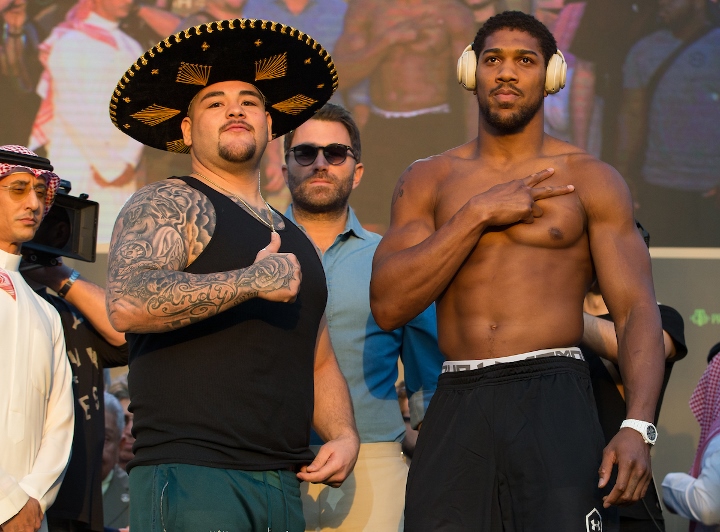 The Case for Ruiz: The case for Ruiz is pretty simple: he already did it once. Ruiz doesn’t look the part of heavyweight champion. That’s been beaten to death. Every generation seems to have its robust heavyweight who still manages to hang with some top tier guys. Fighters like Tony Galento and Chris Arreola made for fun scraps but stayed at a certain ceiling. Ruiz busted through by staying relaxed, patient, and then putting his punches together when he had the chance. Ruiz remains deceptively quick and his scale weight Friday may be, appropriate for the desert nation of Saudi Arabia, a mirage. He doesn’t look heavier; it wouldn’t be unreasonably to think he slipped a few extra pounds under his sweats or into his pockets to play the mind game. Expect more of what we saw in June. When Ruiz can punch with Joshua on the inside, he has the advantage with a left hook Joshua couldn’t see coming the first time. Also an advantage: there is a body of evidence now to suggest when Joshua gets hurt, he stays hurt. It took Joshua several rounds to get back into the fight with Klitschko. Ruiz didn’t let him off the hook.  If Ruiz waits for his spots and doesn’t try to fight outside himself, he has a big chance to repeat.

The Case for Joshua: The 2012 Olympic gold medalist still has plenty of physical advantages. He’s longer, taller, and for a single shot hits harder. Joshua struggled with the fluidity of Ruiz the first time. One of Joshua’s assets to date has been his ability to fight inside; he might be better at it than any man his size since Riddick Bowe. The problem for him is it hasn’t been as much an asset against smaller, quicker men. Alexander Povetkin had a lot of success; Ruiz had more. Joshua is leaner for this fight than he has been in years, eschewing the bulk and potentially playing for more speed and stamina. If he can establish his jab, and resist the urge to go for broke even when Ruiz seems hurt, Joshua has the tools to keep the fight outside and pick away for a win. Knowing what to expect this time, will Joshua be more mentally prepared if he gets in trouble? Ruiz is likely to land something good at some point. How Joshua responds will be as significant as any jabs or right hands.

According to the scale, we’re dealing with different fighters this time around. Visibly, it’s a more notable shift for Joshua. The UK product started his career near 230 lbs. and had added over twenty pounds of mass. He’s leaner and lighter for this fight but will it matter if he gets sucked into a trench war? FightHype’s Paul Magno wrote an interesting piece this week speculating about the politics of this fight and there is a case to be made that Ruiz will be working against the current of the sport. That said, twelve rounds is a long time and Ruiz didn’t just catch Joshua with a lightning bolt. He embraced the moment and still seems to be having a blast. We know he can beat Joshua. The onus is on Joshua to show different. For now, as was the case with Wilder-Ortiz II, we know going in that one guy takes the shots of the other better. That man is Ruiz until proven otherwise and he’s the pick to retain on Saturday.

Before seeing how much Ruiz weighed I was thinking he was going to run right through AJ again but now that I see he’s so much heavier I am not sure. I still think Ruiz will win but the longer…

I swear, if I read one more idiot on here day that Ruiz has something in his hat, his pockets or leg weights on to try and justify him being FAT AS FUK. The truth is, this fat turd ate…