Andy Ruiz To Adam Kownacki: I Want To Fight, Let's Do This!

Ruiz flashed the exceptional hand speed that has defined his career, landing hard combinations to the head and body of the taller Dimitrenko. Ruiz stalked Dimitrenko, controlling the center of the ring and picking his spots to unload.

"He started slowing down and I could see the face he made when I hit him with body shots," said Ruiz. "I just stayed disciplined and focused. I couldn't get too anxious. I just wanted to break him down until the tree fell down." 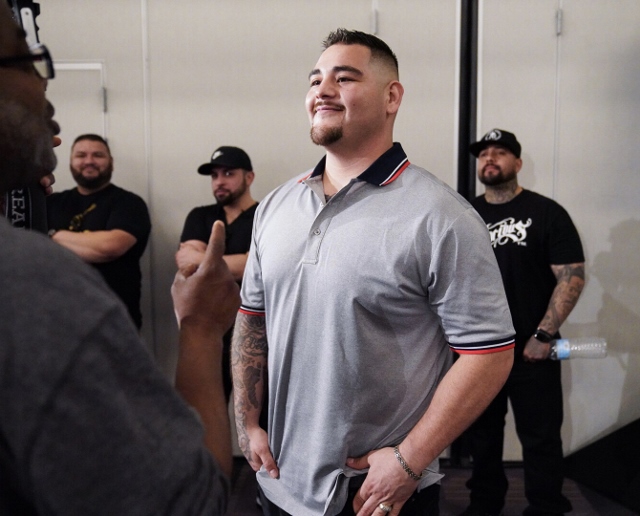 Dimitrenko tried to use his jab to keep Ruiz at bay and was able to cause a welt under Ruiz's right eye as the early rounds went on. It was not enough to keep Ruiz from coming forward and in round five he began to pile up the punishment, punctuated with hard right hooks that snapped Dimitrenko's head back.

"We worked on slipping his right hand and coming back with my own," said Ruiz. "I missed with a few of them but I stayed busy. I focused on just getting the job done."

After the fifth round, and on the advice of Dimitrenko's corner, referee Ray Corona stopped the bout before round six could commence. Ruiz was comfortably ahead on all three scorecards and set his sights on another top heavyweight contender for his possible next opponent.

"For my next fight there's somebody like me, a chubby exciting fighter I want," said Ruiz. "Adam Kownacki I'm ready, let's do this."

[QUOTE=_Rexy_;19684355]I'm going off of TBRB rankings.[/QUOTE]4get rankings - wat does ur eyeballs tell u? Sloppy fat, stationary, easy to hit - b level hws! Neither stand a chance against Aj, Wilder, Fury, Ortiz...

Both are solid top 10 HW fighters despite how they look. [IMG]https://media.giphy.com/media/RIdVbARmAscRq/giphy-downsized-large.gif[/IMG]

[QUOTE=IRONCHINHAGLER;19684342]cmon Bro - rankings are corrupt and depends on who ur promoter is. The eyeball test should tell u both these fatboys r b-level!![/QUOTE] I'm going off of TBRB rankings.

[QUOTE=_Rexy_;19680875]How are they B level? Kownacki is top 10 and Ruiz was in the top 10 before his layoff.[/QUOTE]cmon Bro - rankings are corrupt and depends on who ur promoter is. The eyeball test should tell u both these fatboys…

[QUOTE=IRONCHINHAGLER;19679440]Even matchup. - battle of the sloppy fat B-level hws!!! Haymon prob wont let it happen - needs these 2 slobs for Wilders endless voluntary defenses....either that or WBC will miraculousy give one or the other #1 ranking - ala…