The unbeaten Tabiti defeated former cruiserweight champion Steve Cunningham by unanimous decision in their 10-round fight at T-Mobile Arena. Tabiti won their seemingly competitive fight 97-93 on the scorecards of judges Robert Hoyle and Tim Cheatham.

The third judge, Eric Cheek, scored each of the 10 rounds for Tabiti in the first fight Showtime Pay-Per-View televised as part of the Floyd Mayweather Jr.-Conor McGregor undercard. Tabiti is promoted by Mayweather’s company. 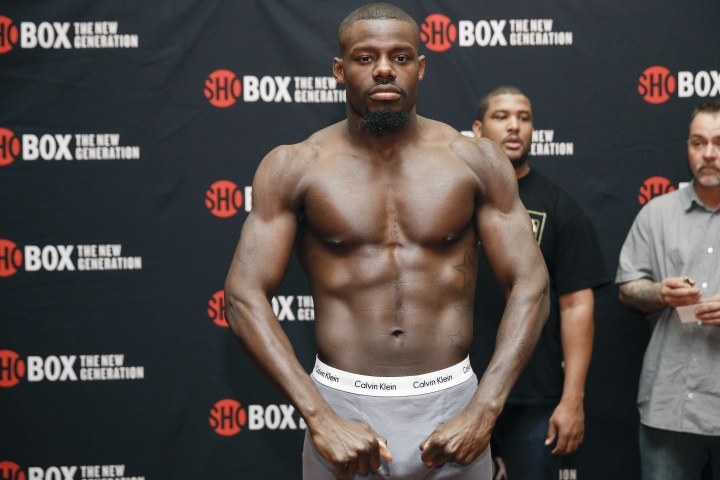 Tabiti, a Chicago native based in Las Vegas, improved to 15-0, retained the NABF cruiserweight title and won the USBA cruiserweight championship in what was a step up in competition. The 41-year-old Cunningham dropped to 29-9-1.

Philadelphia’s Cunningham strongly disagreed with the decision because he believes Tabiti was too cautious and refused to engage.

“I don’t think Andrew Tabiti is a championship-level fighter,” Cunningham said. “I thought I won the fight. I didn’t think I saw anything special from him. He was quick and sharp, so I didn’t want to just lunge in and make a mistake. I took my time, but when I saw that he wasn’t trying to fight, I had to push it a little more.

“I was in there trying to fight. I thought we should have gone in there and worked for our money. He didn’t want to give the fans the show they deserved.”

The 6-feet-3 Cunningham took the fight to Tabiti from the opening bell and appeared to use his size to his advantage against a shorter fighter. Cunningham’s work rate slowed down during the second half of the fight, though, when the 6-feet-1 Tabiti became more accurate with his jab and landed more punches overall.

The 27-year-old Tabiti stood his ground more in the second half of the fight as well. Earlier in the fight, Cunningham was the aggressor and Tabiti continually moved away from him.

“I was just jabbing him and making sure I stayed smart,” Tabiti said. “He’s a veteran, so I had to stay composed. I wanted to show that I could box. This was a step up for me and I felt comfortable in there.

“He had a decent jab, but he wasn’t busy enough. I just didn’t want to make mistakes. If you start too fast against a veteran, you’re liable to get caught by him. I just stayed calm in there. I wanted it to look like I was a veteran. He didn’t press the issue enough. When he did, I was trying to catch him.”

Tabiti knocked out 12 of his first 14 opponents, but none were nearly as accomplished or experienced as Cunningham, a former two-time IBF cruiserweight contender and onetime heavyweight contender.

Before Saturday night, Cunningham had fought just once in the previous 16 months since his unanimous-decision defeat to then-WBO cruiserweight champion Krzysztof Glowacki in April 2016 at Barclays Center.

[QUOTE=PACnPBFsuck;17985163]Really disappointed in Steve's performance[/QUOTE] Steve was always a paper champ and a bum.

USS looks like he has finally fallen to gatekeeper status. It was a good, if uninspiring win for Tabiti. Would be interested in seeing him in against Michael Hunter

Big man in a Philly Shell, beat a bigger man from Philly! Beautiful!