The start of the fight was very cautious, both boxers not taking any risks at all.

IBF #2, WBA #5, WBO #9 and WBC #15 Fayfer was ducking lower, making himself a smaller target, while covering behind a tight guard. Tabiti used a shell-like defense with a solid use of his left shoulder. It was mostly fencing early on but the American showcased better reflexes and higher speed. Fayfer pressed more but often went forward without his guard being high enough to protect himself against counter hooks by Tabiti. 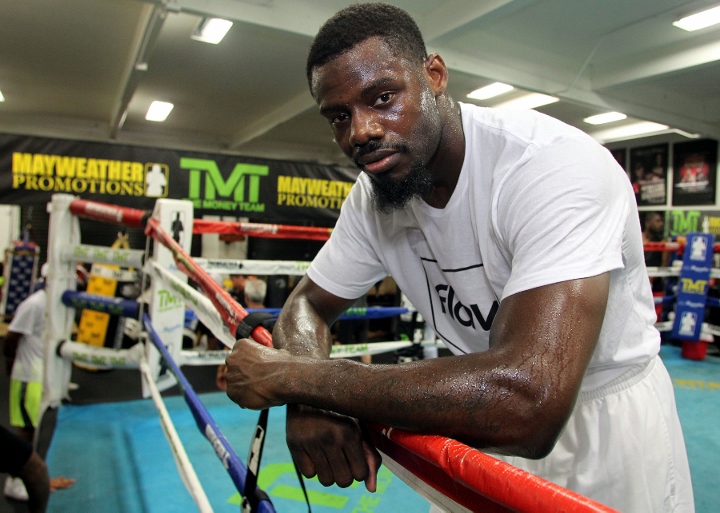 As rounds went by, it became obvious, the American had more energy in his tank, being lighter on his feet and landing more. Fayfer often pushed his opponent without a punch, which made referee Roberto Ramirez Jr. issue several warnings.

Tabiti was considerably better in mid rounds. At one point, Fayfer changes his stance to an unorthodox, being clearly frustrated by the American.

Carrying on his will alone, despite fatigue and weariness, Fayfer was able to get back into the fight in rounds eight to ten. He often punched on his way in, using one big right hand to tag his foe, then pressing him forward to the ropes and clinching on the inside.

In the eleventh round, Tabiti used his short right and left hooks on the inside to trouble Fayfer, who was later deducted a point from the referee for the same sin - excessive pushing and holding. Both boxers gave their all in the twelfth and final round. BoxingScene had it 115-112 - for the American.

its big disappointment. There is a possibility that he may beat Dorticos in semi final but i think he has no chance against Briedis.

[QUOTE=larryxxx..;19190500]what is the point of another WBSS at cruiserweight this fast when Usyk has all the belts?[/QUOTE] From a interview I saw with Kaile I took the situation like this Usyk will move up to HW if he beats Bellew…

[QUOTE=larryxxx..;19190500]what is the point of another WBSS at cruiserweight this fast when Usyk has all the belts?[/QUOTE] That's exactly what I wanted to know after they announced ANOTHER Cruiserweight WBSS tourney 5 min after Usyk cleaned out the division. All…

[QUOTE=sportsplato;19190298]In the US, most kids don't really think about boxing. Not much money and no educational benefits. That's why a lot turn pro in their late teens and early 20's. They are learning on the job. If you have the…

[QUOTE=SchoolTheseCats;19190878]Maybe u missed his post saying Americans take long to step up when both his idols fought bums well into they 30’s.... getting ktfo and your face busted and exposed getting bullied around by the smaller guy is nothing brag…