Andrew Moloney has two major milestones to look forward to in the near future.

The first order of business is returning home to his loving family. His time spent waiting for that quarantine period to end to make that happen also provided an opportunity to announce the second item on his immediate agenda—taking the next step toward regaining his 115-pound title.

“I’m extremely excited to announce that I will be having a rematch with Joshua Franco,” Moloney (21-1, 14KOs) announced upon returning home to Australia. “I want to say a huge thanks to [Hall of Fame promoter] Bob Arum and the Top Rank boxing for giving me this opportunity.” 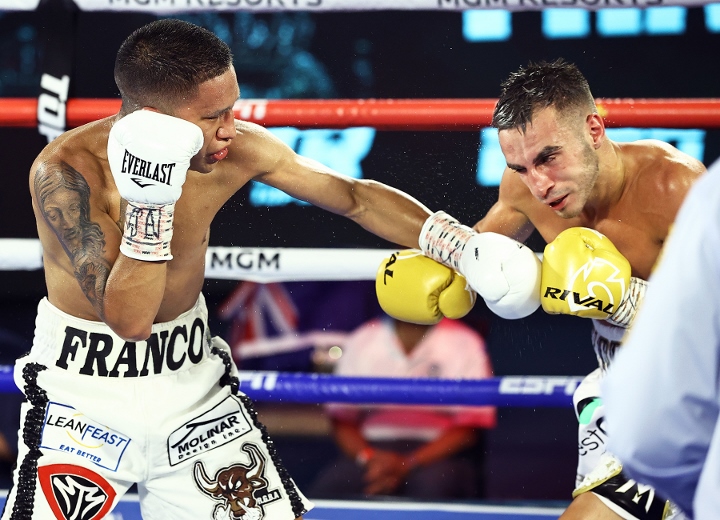 Moloney’s first career fight in the United States didn’t quite go according to plan, suffering his first career defeat and the end of his short-lived secondary junior bantamweight title reign. Both came at the hands of Joshua Franco, whose strong second half surge and late knockdown propelled the San Antonio native to victory in their June 25 ESPN-televised title fight in Las Vegas.

The bout was a voluntary title defense for Moloney, who was upgraded from WBA “interim” to “World” champion in the 115-pound division this past March. The hope was to get to a title consolidation clash with WBA “Super” champion and modern-day boxing legend Roman ‘Chocolatito’ Gonzalez.

In order to reach that point, Moloney will have to first settle up old business.

“I worked my whole life to get that world title and I’m now hungrier than ever to get it back,” insists Moloney, who along with twin brother and current bantamweight contender Jason Moloney (21-1, 18KOs) had been in Las Vegas since late May.

The title loss also came at a physical price, as Moloney was taken to nearby University Medical Center after experiencing nausea and dizziness. The 29-year old suffered two perforated ear drums, first in round four and then in round seven. He has since fully recovered and awaits the loving embrace of his family before working toward once again being able to lay his hands on his old title.

“I’m in hotel quarantine now and counting down the days until I can see my family who I’ve missed like crazy,” notes Moloney, who arrived back in country on Wednesday. “I can’t wait to get back to America and fight on the big stage again soon.

“I’m now more motivated than ever to get my world title back.”

that fight was'it close he beat moloney up

He wants another ass whooping while winning on the scorecards Rofl

[QUOTE=Kannabis Kid;20639638]Na you know how the WBA is they have like 3 titles I know in terms of hardcore fans they don't count the secondary belts but in the books Joshua Franco is the WBA regular champ and Roman is…

[QUOTE=Boxxymcboxface;20639588]He was? I thought it was vacant. Chocolatito vacated it for some reason or something.[/QUOTE]Na you know how the WBA is they have like 3 titles I know in terms of hardcore fans they don't count the secondary belts but…