Andrew Cancio finally took a day off. No boxing, no Southern California Gas Company, just a day to celebrate what may have already taking the unofficial award as feel-good story of 2019.

“It’s a long day today,” Cancio said Tuesday. “I’m getting the key to the city and getting my belt.”

Born and raised in Blythe, California, the 30-year-old was celebrated in his hometown for winning the WBA junior lightweight title in February, but while that fourth-round knockout of previously unbeaten Alberto Machado was the impetus for the festivities, it was more about recognizing the power of persistence and the fact that getting knocked down doesn’t mean the fight is over.

That doesn’t mean the 30-year-old simply put his head down and walked through all the obstacles in his way. There were times when the business was beating him down, when all the high expectations were suddenly going up in smoke. And when he was stopped in nine rounds by Joseph Diaz in a NABF featherweight title fight in September 2016, he thought it was all over for his career in the ring.

“There was doubt after the ‘JoJo’ Diaz fight,” said Cancio. “That was a big step back and I wasn’t thinking about getting back in the ring at that time. Things weren’t going the way I thought they were gonna go, so yeah, you have doubts. But for some reason, something inside of me told me to keep going and here we are.”

Sounds like an easy transition, but it wasn’t. He took a job with the gas company to put food on the table for his two kids, but around this time last year, he was getting ready to fight again, this time as the B-side against 7-0 prospect Aidar Sharibayev. Cancio had the type of name to propel the Kazakhstan native’s career forward, but it was “El Chango” who dropped Sharibayev twice en route to a tenth-round stoppage. 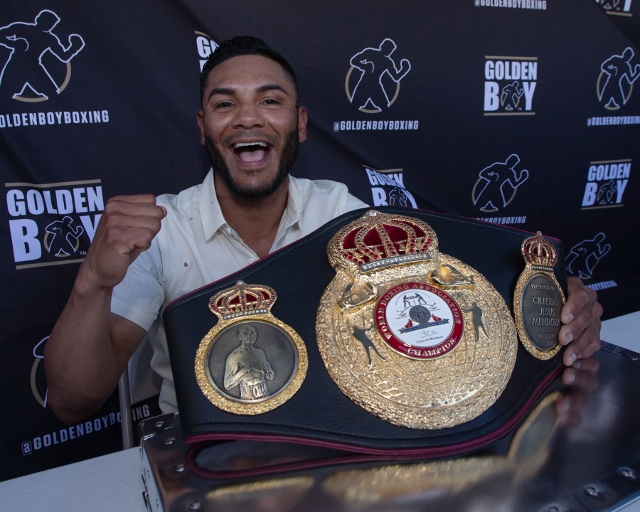 A Golden Boy contract followed, and after an August win over Dardan Zenunaj, he got the call to face Puerto Rico’s Machado. Now comfortable in the underdog role, Cancio had a quiet confidence leading up to the bout, and the world found out why, as he rose from a first-round knockdown to drop Machado three times and finish him in the fourth frame.

Andrew Cancio was a world champion.

“It was crazy,” he said. “Sometimes I still can’t believe it. There were a lot of emotions, a lot of excitement. I finally did it. I accomplished my goal, my dream.”

It was the west coast version of the Rocky story, but this was better because it was real, a living reminder that while boxing has its share of problems, it is also a sport where one night can change the direction of someone’s life forever. And if you were a fan of boxing, you had to smile when hearing Cancio’s story.

“I’m grateful,” he said. “I like how people helped me get my story out there and it feels good that people send messages to me on my social media saying that I inspired them to keep going. I’m blessed to be in this situation and I’m happy that people are listening to my story.”

Tuesday’s ceremony at the Joe Wine Recreation Center was the peak of this chapter in Cancio’s life, and now he is looking forward to writing the next one, this one as defending champion.

“We’ve already been back in the gym, working,” he said. “Supposedly Machado wants the rematch and we might be fighting him again on June 8th, so we’re already into it. And after today, we’re full on in camp getting ready for June 8th. I’m more than excited to be defending my belt against either Machado or whoever, and I’m gonna train just as hard as I always have to keep my belt.”

Listen to Cancio say those words and you can hear the pride in his voice. Bitch all you want about sanctioning body nonsense and you might be right, but don’t tell that to the fighter whose only goal was to get one of those championship belts around his waist. To that fighter, it means the world, but Cancio isn’t satisfied with one. He thought of returning to 126 pounds but decided against it. But lightweight isn’t out of the question.

So he’s getting greedy for more belts?

Cancio especially liked getting his belt officially from his promoter Oscar De La Hoya Tuesday. But will he wear it to work today?

“I should, huh?” he laughs. “I should walk in there with the belt, that would be a good one.”

He earned that belt. Now it’s time to defend it, and the cycle starts again. That’s the way of the sport. But between training, working and family time, he has found a minute or two to reflect on the best night of his career and everything it took to get there.

Good to see such a hard worker becoming champ. He made $60,000 in the first Machado fight, IIRC. I wonder what he'll make in the rematch.

Cancio is the true WBA Champ, Tank's got a paper title.

Yes you should train hard for every fight just like former malnourished and dirt poor Pacman is doing. 🤔