In a few weeks, the nearly 7,000-mile trip from Athens, Greece to Big Bear, California begins again for Andreas Katzourakis.

It’s not pleasant, it’s not something to look forward to, but once he arrives at Abel Sanchez’ The Summit Gym, the 23-year-old knows it’s all for a reason.

“Once I put my mind into the right place, and I think about why I'm doing all these things, it's not that difficult,” Katzourakis said of the sacrifices he’s made as he attempts to become a world champion. “The first time that I did it, it was a little bit difficult the first week, and that happened when I was 20 years old. But I really want it. I really want to achieve my goals; I really want to become someone in the sport of boxing and that says it all. Once you put your mind in the right place, there's nothing that can stop you.”

So far, so good for Katzourakis, who is 6-0 with five knockouts since turning pro in 2018. The most recent win over Brandon Baue in December was the first one with Sanchez in his corner, and while the third-round TKO victory was nice, what was better was that the middleweight up and comer now has a world-class trainer guiding him, one who was the top – and only – name on his list.

“I know it will sound cliche, but honestly, because of (Gennadiy) Golovkin and some other fighters that he had trained, Abel Sanchez was my favorite coach,” said Katzourakis. “It’s because of his style and his approach, because of his personality, because he was very old school, and you could tell. I really admire old school fighters and fighters that were working hard and were always conditioned to be able to go 12 rounds, get hit, punch hard and to give the fans what they really wanted to see. So because of that, I always admired Abel Sanchez. And to be honest, I never thought I would work with him. But once my manager (Brendan Segalas) told me that we might be able to get you in touch with Abel, I said, let's do it. I really don't want to train with anybody else if we can train with Abel Sanchez.”

With that out of the way, plus with Split-T Management on board, everything is in line for Katzourakis to focus on boxing and moving up the 160-pound ladder. It’s not something that really would have been possible with him still in Greece, where boxing isn’t exactly the national sport.

“I think the problem is not only in boxing back in Greece, but the athletic sector in general in the amateur divisions has not been televised a lot and has not been advertised a lot, so there are not many amateur opportunities,” Katzourakis explains. “So when there is not an amateur opportunity and the kids are not growing up doing something, they'll not turn pro as well. I think that's the biggest problem. The problem is in the root back in Greece in the athletic sector, and once this changes and once the sport becomes more popular, I think more fighters will start developing themselves.” 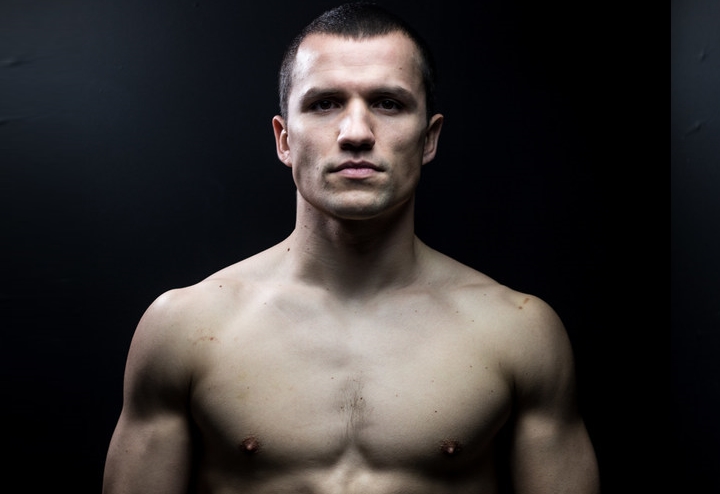 Katzourakis is being noticed by Greek fight fans, though, and as witnessed by the rise of “Mighty” Mike Arnaoutis a few years back, as well as the emergence of fighters of Greek descent like Michael Katsidis and George Kambosos, fans will get behind their own, especially if they show up to fight like Katzourakis does. Add in Sanchez, who earned his rep as a trainer specializing in the offensive game and seeing boxing’s latest action hero coming out of Greece isn’t as far fetched as you might think.

“I believe I can punch and I like to fight,” said Katzourakis. “I like to get into fights - in the boxing ring, of course (Laughs) - and this is what boxing is missing nowadays, some real fights that are crowd-pleasing. And I think that's what Abel is producing with his fighters. I like it. His style, it's offensive, very technical and compact. They are not rushing, but they always pressure.”

But is he comfortable with being the one carrying the fistic hopes of his nation on his shoulders?

It’s an ambitious goal, one that may not have been on Katzourakis’ radar if not for the fact that his father was a kickboxer. Yeah, if you wondering how a place not known for producing boxers produced Katzourakis, that’s it.

“There definitely weren't a lot of kids going to boxing, but I was lucky enough to have my father in the kickboxing sector, and once I saw him, I really wanted to try it,” he said. “So I think I was two or three years old, I was watching my father practicing and I was asking him and asking him to get me into it, and finally when I turned four years old, I started training in karate. Then I turned to kickboxing and I started fighting when I was five, six years old.”

Over 600 reported martial arts matches and several titles followed in the amateur ranks. Then everything changed as he hit his teen years.

“Around 13 years old, I watched a couple of gentlemen spar in front of me,” Katzourakis recalls. “They weren't fighters, they weren't even amateurs, but they were really technical, and they loved and enjoyed what they were doing. And once I saw them in front of me, I said, this is what I want to do. I started watching boxing, I started reading books, I got obsessed with it and after a month I won my first National championship in boxing.”

By 2018, he was in the pro ranks, and while it wasn’t the start he expected, in the last five months, everything started to click. And he can’t wait to keep that momentum going in 2021 and beyond.

“Back in Greece, it was very difficult in the amateur sector and it was very difficult to keep a goal in your mind and have a target because it was so far away and so difficult to achieve,” Katzourakis said. “My first years were a little bit difficult and I had trouble with my previous management, but once Brendan Segalas and Split-T Management contacted me and I started working with Abel and everything started to get into place and really happen in the last four-five months, I can't describe how excited I am.”

“Back in Greece we don't have that much snow, so I enjoy it a little bit,” he laughs.