Andre Ward: Thurman Has A lot To Prove Against Pacquiao

The fight takes place at the MGM Grand Garden Arena on the Las Vegas strip and will be distributed by Fox pay-per-view.

Ward now serves as an expert color analyst for ESPN and was in Kissimmee, Florida for Jamel Herring’s upset win over Masayuki Ito to capture the WBO super featherweight title in a bout that served as an ESPN main event. 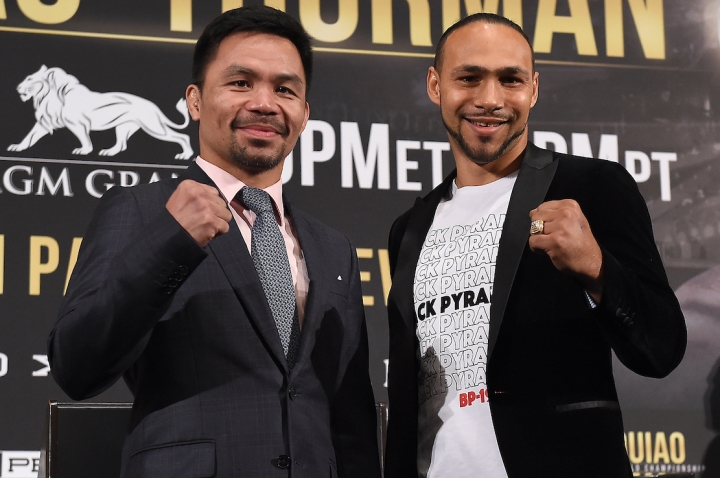 Fighthype.com caught up with Ward after the fight and asked in a video interview for his take on the upcoming Pacquiao-Thurman showdown.

"That is a good fight man. You got an older Pacquiao who is gonna be there a little more than he normally is. You got a Thurman who got a lot to prove. He got some people speaking down on him saying that he is ducking Spence. I am not going to get involved in whether he is ducking him or not but that is what a lot of people are saying, said Ward.

“He didn't really look great in his last fight so he got a lot to fight for. Beating Manny Pacquiao is like winning 4 or 5 regular fights just from that win right there, having that name on your resume."

Ward was referring to Thurman’s January unanimous decision victory over Josesito Lopez. Thurman looked rusty and was buzzed and hurt by the gritty Lopez in what was Thurman’s first fight after sitting out for nearly two years because of injury.

As for who he would like to see the winner face, Ward said, "Man I am trying to see any of them mix it up. I am not picky. There are a lot of great guys at 47. I get the timing thing. I know guys are trying to position themselves financially. Do that but at some point in time y'all gotta mix it up."

[QUOTE=dibzvincent143;19779058]Not saying it’ll be a walk in the park but that’s part of the narrative. I’m a fan of pacquiao and I hope he wins, but Thurman is fighting an old guy past it guy... the result of this fight…

[QUOTE=MulaKO;19778395]You make it sound like it should be a walk in the park I think Pac would give Spence and Bud problems Maybe he would lose against the last two but no fughin walk in the park , that’s for…

[QUOTE=hitmanjosh;19778139]Let's just be real, If Thurman who fought his last fight had been in there with Pacquiao he would have been stopped so either he raise his game or go home early! It's that simple[/QUOTE] Fact is, Josito is a…

[QUOTE=dibzvincent143;19778280]He has to prove he can actually hang with an old dude. He gets the oldest version of pac so far. So no excuses Whatever he has gone thru the past two years is nothing to a 10 yr disadvantage…