Australian boxing great Jeff Fenech has shown little sympathy for Jeff Horn after he struggled to make weight for his world title fight against Terence Crawford.

Fenech watched from the stands at the MGM Garden Arena on Saturday Friday as Horn took three attempts to come under the 147 pound (66.67kg) welterweight limit - much to the delight of Crawford's camp, and to the derision of the majority of the crowd assembled.

Horn was quick to blame "tricks" from promoters Top Rank - who quickly denied any allegations of foul play - while his trainer, Glenn Rushton, insisted they had not gotten anything wrong in their preparation.

"Hopefully it's a trick from Top Rank. If it's an error from the Horn camp, it's not a good error," Fenech said.

"It's unprofessional not to make weight. As a pro, every one of my fighters, I take them and check the official scales and make sure because all scales are different.

"They're saying they calibrated them both from the same scales so it seems funny to me." 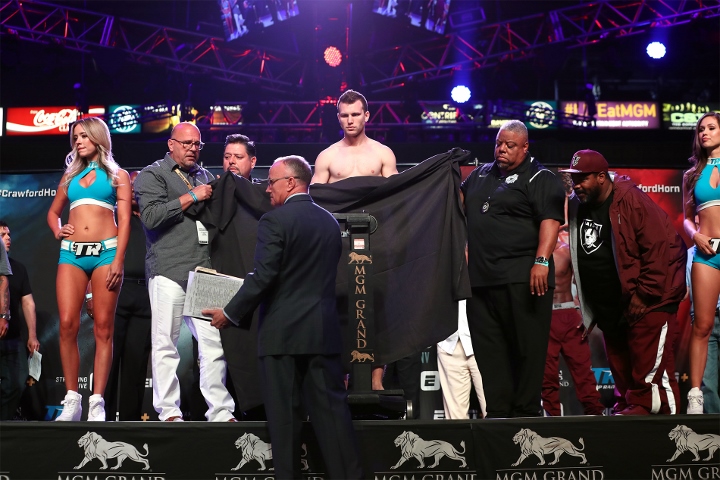 Another former world champion, Andre Ward, said it was a "bad look" for Horn, especially considering he is the man with the belt.

"You've got to get a medical grade scale, a digital scale, you've got to have two or three scales to make sure you're right on," Ward said.

"I saw Crawford light up, every fighter wants their opponent to be overweight, 'I'm hydrating, I'm eating, you're still training yourself to make weight'."

But now that the weigh-in troubles are behind him, Fenech says Horn has to make the most of the extra size he will carry into the ring.

"Jeff's got to make that and use that as an advantage," Fenech said.

"That's by getting in without getting hit, bullying him around, doing what he done to (Manny) Pacquiao.

"But he's got to do it better than what he done to Pacquiao. This guy is a class above that Manny Pacquiao. He's a great athlete.

"Obviously he's got a game plan, but he's got to implement the game plan perfectly - by getting in there without getting hit, working the body, keeping those hands free so the referee doesn't stop them and start them.

"There's a lot of things he's got to do and do right in this fight."

[QUOTE=moochi;18843960]Indeed a boxing legend overall, it took 30 or so years for one of his records to be broken only a month or so ago by Lomachenko.[/QUOTE] Exactly Jeff held the quickest to win world championship belts in 3 weight…

Fighters that only make weight late do not have a weight advantage late on. They are drained from exhausting themselves to cut that final weight. Example: Benn vs Eubank I’m a big boxing and ufc fan and I’m so fed…

It's really no surprise - Horn is more of a natural 154 or even 160 pounder; I bet he walks around at about 165. If he (or when) he loses this fight, he can blame weight issues and will do…

[QUOTE=JLC;18843632]Isnt Fenech Australian? Isnt he in The International Boxing Hall of Fame? I would say that pretty much qualifies as an Australian Boxing Great. Nothing wrong with calling out fighters even from your home. Means he isnt a nut hugger.[/QUOTE]…