Andre Ward: Facing Anthony Joshua is NOT Off The Table!

Ward's dream is to replicate the accomplishment of Roy Jones Jr., who is 2003 jumped from light heavyweight to capture the WBA heavyweight title from John Ruiz.

If Ward and Joshua were to collide, the British boxer would have a six inch height advantage and an eleven inch reach advantage. 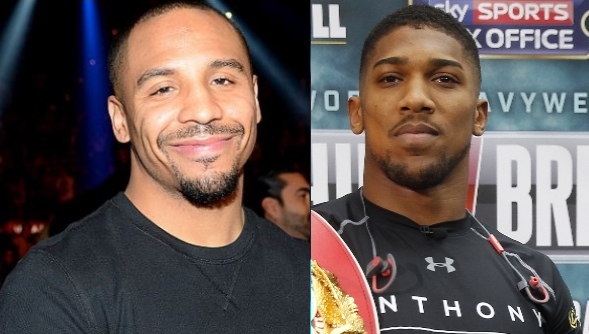 The topic first came up after Ward stopped Sergey Kovalev in their June rematch.

"I'm not playing, I am serious," said Hunter. "I believe he could outbox Anthony Joshua. It would be a waste of time to go to the cruisers (cruiserweights), we should go for it all."

Ward was caught off-guard and had no idea that Hunter would bring up the subject of a Joshua fight - but he's still not ruling out the possibility of that contest taking place one day.

Ward feels confident that he can beat anyone.

"Nothing is off the table," said Ward to Sky Sports. "I have got a lot of respect for Joshua, he is the heavyweight champ. He has earned it the hard way, he beat the old guard in (Wladimir) Klitschko, a great fight. I just wish Virg had tipped me off, gave me a heads-up.

"I had just come out of a battle, I am licking my wounds a bit, and then he is calling out the heavyweight champion of the world. I'm like 'Virgil, come on man'! I don't want to misconstrue the message. I don't want to act like we are handling Joshua in any kind of way. He is the heavyweight champion of the world, he deserves that respect. But of course my team and myself, I believe I can beat anybody, so we'll see. Time will tell."

It’d be funny to watch Ward trying to do his usual mauling/wrestling tactic against Joshua. He’d get thrown around like a rag doll and get KO’d within 3 rounds.

No matter what Wards says, he's not serious at all. Ward wouldn't even be able to land anything. AJ would crush him in the first round.

[QUOTE=The Madison;19023436]what happened to this?[/QUOTE] Ward was begging for some attention, and hoped that people gave a shi.? That guy basically got retired by the fans because nobody wanted to see his dirty style and didnt fall for the manipulation…

what happened to this?